Jan Post visualises the pot orchid of the future 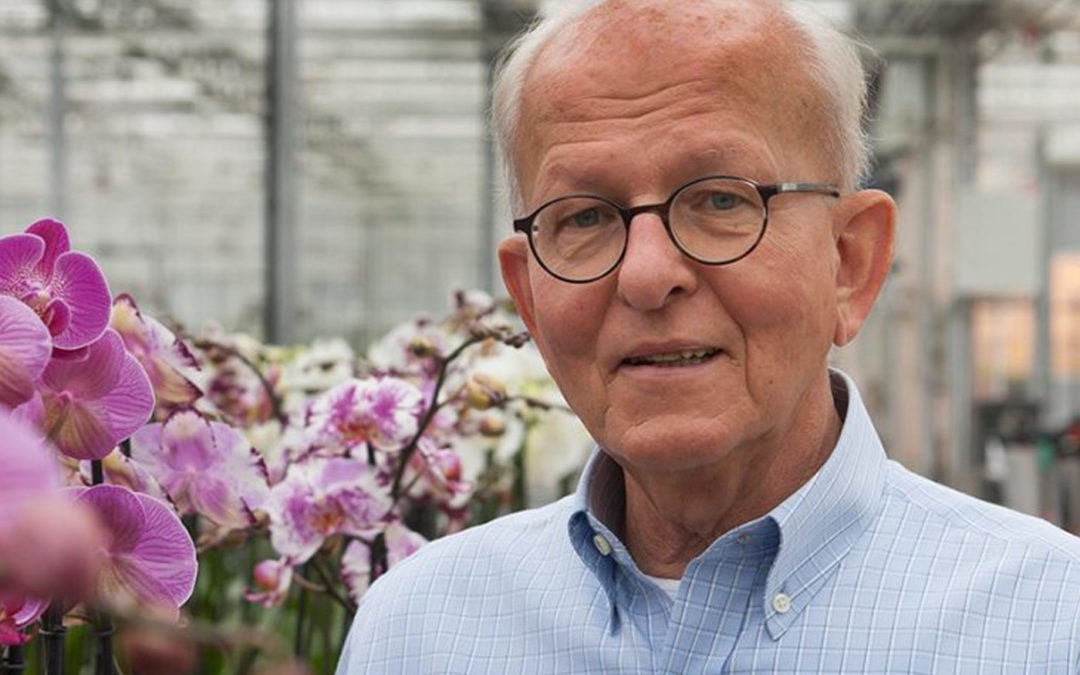 Over the last 30 years, of all the orchid species, phalaenopsis has developed into one of the most popular flowering pot plants. Jan Post, of Dutch market leader Floricultura, has been at the forefront of this development. He predicts renewal within the assortment. People are appreciating plants more, especially those with a natural appearance.
[wcm_nonmember]
If you want to read this content you need a subscription, or log in when you already have a subscription.
[/wcm_nonmember]
[wcm_restrict]
The phalaenopsis that decorates our living rooms today looks nothing like its ancestors that exist in nature. The small star shaped flowers have been transformed into large round blooms. In the search for a house plant with long shelf life the fragrance has more or less vanished. Do consumers actually realise that? wonders Jan Post, breeder and former owner of Floricultura. “No one really takes into account consumer wishes, because we don’t know exactly what they are.”
Many years ago orchid growers jointly organised a large consumer research project. This revealed that men want large flowers with bright colours while women prefer flowers that are small, exotic, elegant and graceful. The reason that the phalaenopsis has transformed into its present form could be because men choose a gift for women, but above all because breeding, production and trade is a male-dominated world. Breeding of ornamental crops is always more focused on production than on consumers.

“It is difficult to ask consumers the right questions because even they don’t know exactly what they are looking for,” realises Post. “Take for example the stick that supports the stem. People don’t always dare to remove it because they think it belongs to the plant. That’s the sort of level we’re talking about.”
He continues, the man who for than 45 years has visited almost every place on Earth in search of new varieties as well as to do business and gather new knowledge. From Taiwan to America and from Hawaii to New Zealand he has seen several movements in breeding and acquired a nose for fashions and trends. “Actually you see certain trends occurring at the same time all over the world. That’s quite special,” he says. At the moment he senses that people pay more attention to green and exotic. Plants no longer have to be perfect. A twist, a turn in a stem is appreciated again. He says a good example are the Japanese people who traditionally are true lovers of nature’s beauty.

If a breeder wants to go along with such trends he needs at least six to eight years to develop a good variety. He has the time because trends develop slowly in a wave movement. You see them approaching and they don’t go away that quickly. “We look for new colours such as apple green, sky blue, fire red and of course bright shades and exotic flower shapes with colour combinations in the lip. We also look for other plant forms, for example plants with shorter stems and flowers lower down. I believe there is interest in a ‘cloud’ of flowers; a plant that can replace a bouquet of flowers on the table.”

However, growers focus their attention on completely different characteristics. Growers are looking for a plant that grows easily and quickly, that produces many stems and flowers and fits within a certain assortment. For a grower the number of plants that are produced per square metre is important. The price has to be in balance with the quality. The breeder notes that the policy of many growers is cost price driven.
He also detects a tendency for growers to try to respond to the seasons. “The focus is on production in the first half year. This includes the large peaks that stretch from Christmas to the European Mother’s Day when the prices are good,” he explains. This requires some organisation, because as the production shifts, it affects the nursery’s rate of utilisation.
For propagators who have plants available year round the consequences can be even greater. It used to be normal for plants to be propagated to order but more and more often customers want young plants that available on demand.

A third party that has a huge impact on the assortment is the trade. The great strength of phalaenopsis is its long shelf life but the plant is vulnerable during the transport phase. Temperature differences, drought and ethylene cause buds to fall. Therefore the breeder is constantly looking for those varieties that suffer the least.
Regardless of how well the grower tries to meet the consumer’s wishes they are sometimes offset by other priorities, such as uniformity, pot size, length, and number of branches. That determines the final price being paid. “We try to work to this,” explains Post.
One example is the marbled and dotted leaf that belonged to the original phalaenopsis. It has virtually disappeared from the range. When such plants are offered the trade quickly thinks they are diseased. “Traders themselves choose what they buy. We try to develop something which they can’t ignore.”

It’s not often that a florist is disappointed with the range on offer. Florists can be very enthusiastic about an arched stem, a special flower colour, in short a flower on which they can unleash their creativity. Post has noticed that florists in his own region buzz like bees around the breeding greenhouse. They would like to have these varieties – sometimes even the rejected ones – in their shops.
How different would it be if all their wishes could be accommodated? The range of orchids would probably be much wider than now is the case and growers could start to free themselves of the cost price principle. The downward price spiral could then make way for better prices for excellent plants.

When deciding what to have their assortment growers are often guided by the whim of the day. If pink brings a higher profit the demand for young pink plant material increases. When white is popular it’s the other way round. However, the period of propagation, cultivation and production is so long that in the meantime the market has changed. “Sometimes it’s just like the pig cycle,” says the breeder. “Growers need to be able to develop a nose for trends and sometimes dare to differ from the masses. Anyone who can do that stands out above the rest.”
Post also sees enormous differences between growers. For example, within a wide assortment a certain variety might be a disaster for one grower yet perfectly suitable for another. Therefore, even varieties that are difficult to grow are still available.
He also sees a big difference in knowledge between countries. “In some countries the development of the production methods lags a generation behind. Although you shouldn’t say it, part of the assortment needs to be “fool proof”. For example, at our location in California, plants are propagated and only delivered to customers towards the end of the production phase because American growers tend to have less well equipped greenhouses.”

The pot plant phalaenopsis has undergone a huge development over the last 30 years, from seedling production to a wide range of tissue culture, yet it seems that progress continues. In addition to the production of uniform large, medium and small plants, which remain at the forefront, there is still room for new developments.
Post, who actually can rest on his laurels, is still very active. “I am trying to establish a relationship between the wide range of customer segments. What is fashion and what is a real trend? Often we don’t like new products at first. It takes some time to get used to them. Sometimes that’s also the case with the new varieties we breed.”

The successful orchid, the phalaenopsis, has thanks to breeding and the influence of producers grown into a beautiful, uniform product with large, round flowers. The demands of the trade and production are sometimes contradictory to consumer wishes but have led to a very strong pot plant. Breeder Jan Post expects that the range will become even more varied and wider in future.

“Top flower arrangers like to work with orchids,” says Eric Moor, of Sion Orchids. Take for example the fashion shows run by Dior and Versace. Orchids and luxury go together.”

“Leading flower stylist Jeff Leatham is, for example, a big fan and has used orchids to decorate many weddings of the world’s stars. Recently we were able to welcome him to the Netherlands to design the ‘Share your love with flowers’ boat in the Amsterdam Canal Parade.”
Moor also sees developments in the area of ornamental value, such as arches and waterfalls. It is striking that the mini orchid is gaining ground. “I agree with Jan Post that shorter and smaller plants do well as a replacement for a bunch of flowers. Development of varieties is continuous. Here and there you see progress of scented types, as well as further development of the ‘big lip’ phalaenopsis. As breeders we are working hard on the shelf life.”
In the future he expects that longer shelf life and ethylene resistance will gain ground, as well as a shorter production cycle. “I think that further segmentation will take place. For example our customers will make a more conscious choice about which target group they supply. I also expect growth outside of Europe.” 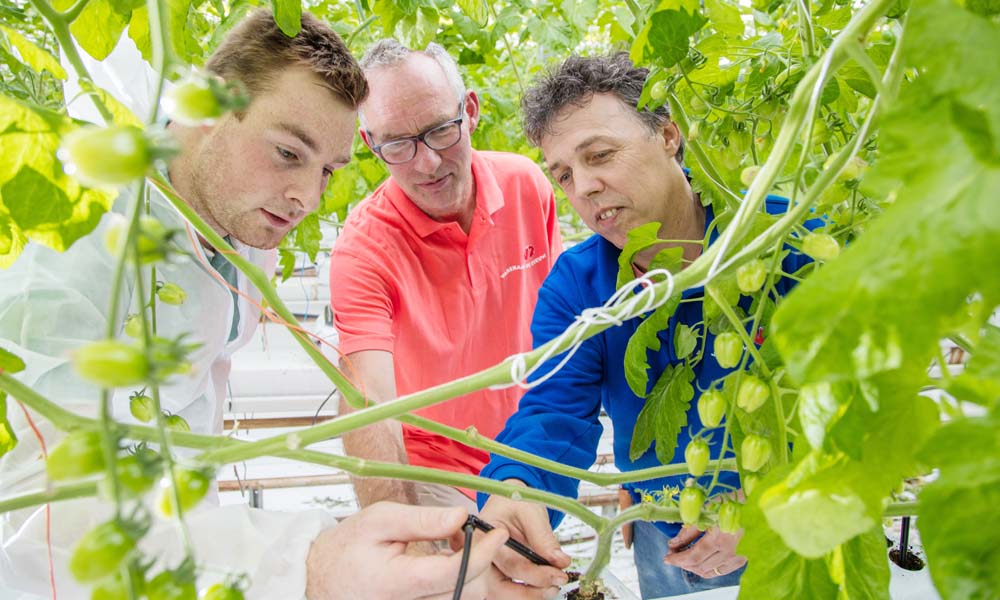 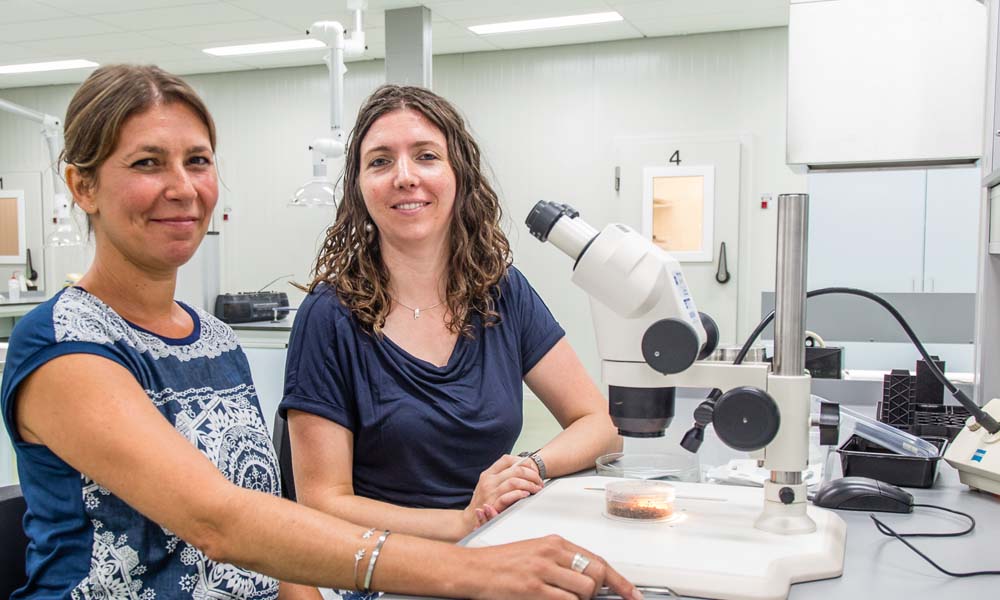 Controlling hyperparasites: on the trail of the best scents 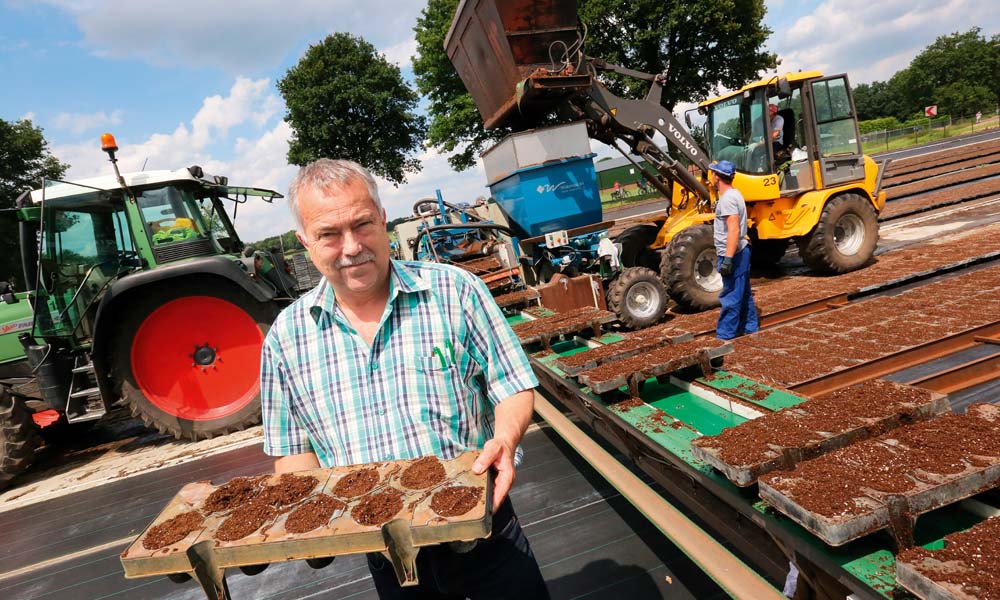 Adding bio to substrate reduces chemical use in strawberries