80 ha of high-tech greenhouses in Moscow

‘Everything is focused on delivering the right quality for our customers’ 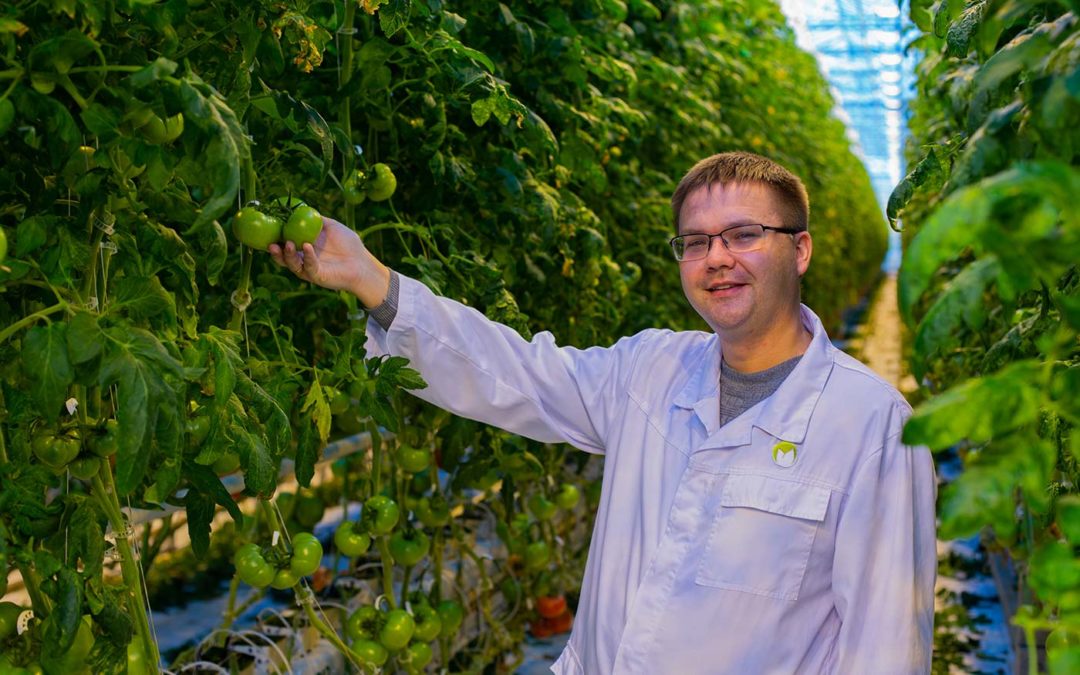 Everything Agrokultura Group does is focused on improving the quality of its fresh produce. It combines its agronomic expertise with advanced greenhouse technology and equipment such as artificial lighting, screens and coatings. That enables the company to ensure that the major retail and food service chains throughout Russia can depend on a reliable year-round supply of fresh and tasty tomatoes, cucumbers and more.

Agrokultura Group completed its first 9 ha of high-tech greenhouse blocks in Moscow, Russia, in 2015. Sergey Volkov, plant protection chief agronomist, has been working there right from the start – “even when there weren’t any greenhouses yet”, he states. He joined the group in 2014 from his previous role as Plum Tomato Production Agronomist at another company. The company has been expanding rapidly ever since and now has 80 ha of high-tech greenhouses.

The customer is king

In its greenhouses, the company produces a wide assortment of crops all year round, ranging from all kinds of tomatoes – including red and yellow plum, medium-sized, cocktail/cherry, medium pink, red, yellow and pink beef – to cucumbers, aubergines, peppers and strawberries.
“We also have our own propagation area and our own packaging equipment on site, and almost all of the products are packed before leaving here. We sell to the major retail and food service chains, not only in the Moscow area but also all over Russia”, he explains. “That requires us to use various different logistics solutions due to the size of the country. For example, we have our own logistics network and trucks, but we also work with external logistics companies, and some of our clients arrange their own transport.”
They keep hardly anything in storage; nearly everything is shipped immediately, which for clients in the Moscow area means that the products can be with them within two to three hours after harvesting. A couple of major food service chain stores prefer us to chill the products to two or three degrees for transport. “We prefer not to do that because it can affect the product flavour, but we make an exception in certain cases. The customer is king.”

This illustrates the mission of being a client-oriented company. “If the market demands plum tomatoes, we grow plum tomatoes, for instance”, declares Volkov. Another thing that sets the company apart is that they have learned how to grow crop types that are not traditionally produced locally. Volkov: “Our pink beef tomatoes are a good example. Everybody who sees them thinks they were grown in the south, such as somewhere like Uzbekistan, where they are three times more expensive. But we spotted this market opportunity and started growing them around three years ago.”
There were some mistakes in the first year, of course, but they learned from them and made fewer mistakes in the second year. And now it’s the third year and it seems to be a case of ‘third time lucky’ because they are seeing much better results and very few problems now. “We have a strong team of very specialized and experienced agronomists, and everything we do is focused on delivering the right quality to keep our customers happy. And we’re now very happy with the quality of these pink tomatoes too.”

All of the facilities are KUBO greenhouses, including 9 ha of Ultra-Clima greenhouses, and all the blocks are fitted with artificial lighting: “We work with Gavita 1000W HPS lamps and expose our various tomato crops to 160 watts for 18 hours. Our cucumbers receive 20 hours of light at 200 watts and sometimes 230 watts.”
The company has also been running some tests with LEDs on 2 ha of cherry tomatoes since October 2019. “We’re not sure how economically beneficial it is yet. We have seen that the yield is higher, but it’s an expensive investment – in Russia there’s a saying, ‘It costs as much as an iron bridge’ – so despite the energy savings it’s still too early for us to know when we will see the financial payback”, he continues.

In the Moscow area, the winters are typically quite mild, down to minus 5 or minus 10ºC. “We have two heating systems in our general greenhouses: a lower-contour system that provides heat in the middle where the fruit crops are formed, and a top heating system positioned above the crops. This is also used to melt the snow on the roof in cold winters”, he explains. “The Ultra-Clima greenhouses are fitted with an additional sleeve heating system/air pipes as well as the lower-contour and mid-level heating pipes.”

“All our greenhouses have some kind of screens, although they are mainly for energy saving rather than shading. But too much energy saving can be bad in mild winters, since retaining too much heat in the greenhouse can cause problems such as humidity and diseases”, adds Volkov. “Besides partially opening the screens, we additionally leave 20% open space between the crops in the winter to avoid such problems.”
In view of the average summer temperature of 20-plus degrees with a low radiation level, the screens have traditionally been less important in terms of shading against the heat. “However, our summers have been getting hotter recently, resulting in temperatures of 30ºC or more, so it is becoming increasingly important to keep the crops cool. We use high-pressure misting systems, plus in the Ultra-Clima blocks we have a special cooling system that filters and cools the air before in enters the greenhouse.”

Another way the company prevents the build-up of excess heat in the summer is through the use of ReduSystems coatings. “I’ve been using these products for the past seven years, initially while working in my previous role. In April of this year, we used a machine to apply a coating of ReduFuse IR to the greenhouses where tomatoes and cucumbers are grown”, he states. “This protects the crops against heat by keeping the IR rays out, but still allows diffuse light through. This even spread of more uniform light prevents direct sunlight from reaching the plants. It results in stronger, heathier plants, less leaf drop, better fruit setting and truss formation, and less spread of pests and diseases. So we get a higher yield of high-quality products.”
In June, a different ReduSystems coating – ReduSol, which lets through less light – was applied to the propagation area to protect the young plants from overheating. “These coatings also help to improve the working conditions for employees, so we’ve applied ReduSol in some technical areas, corridors and the entrance area too.”

“We have a long-standing relationship with the exclusive coating distributor here in Russia, and we receive good advice and technical support from the Dutch specialists too if necessary. Every energy joule is important, so we will buy the cleaning product to wash off the coatings at the end of the crop season early October. Luckily, they are easy to remove, despite being so resistant to weather and wear”, concludes Volkov.
“As for our greenhouse activities in general, we will be adding a further 20 hectares in November, so we will have a total of 100 hectares by the end of this year. And I hope that will be it for a while, because 100 hectares in one location really is a lot, even for me” 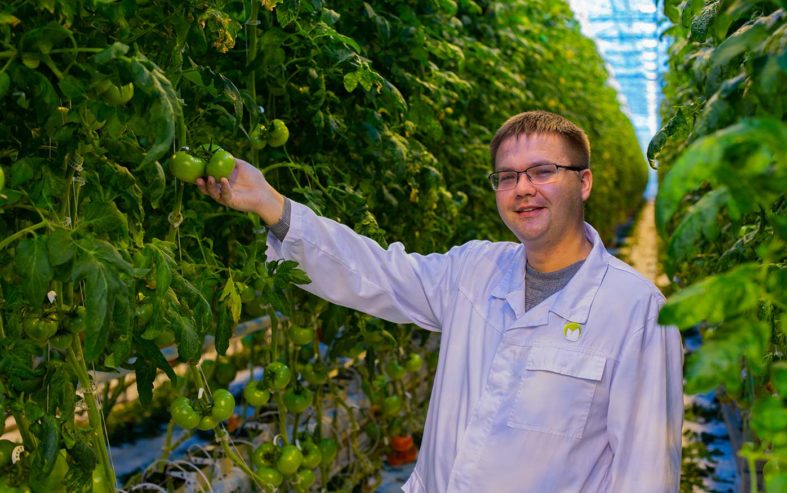 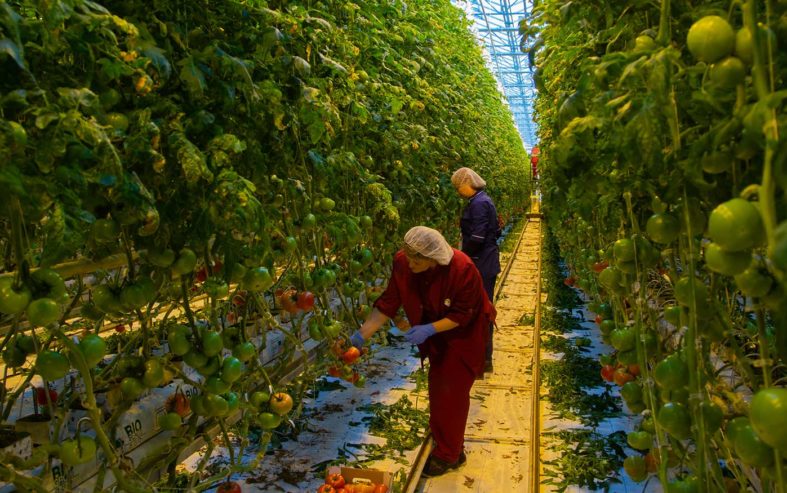 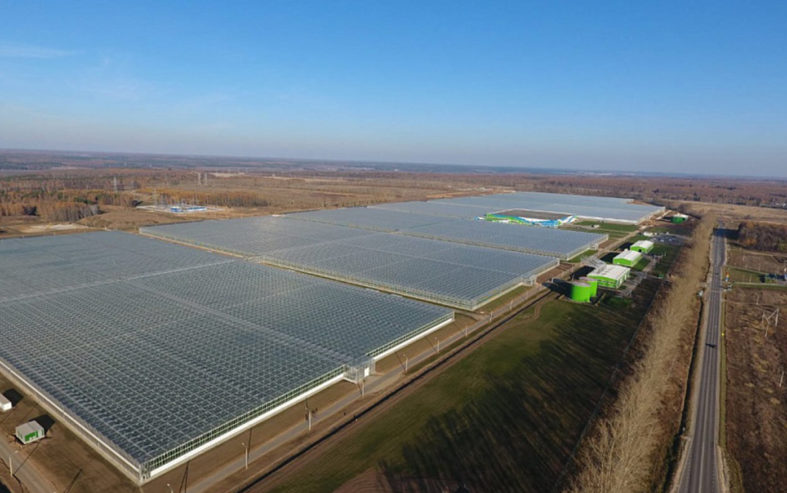 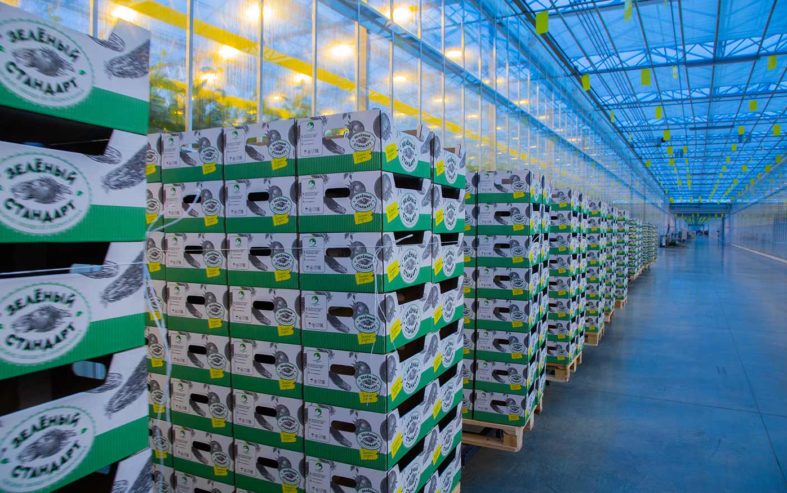 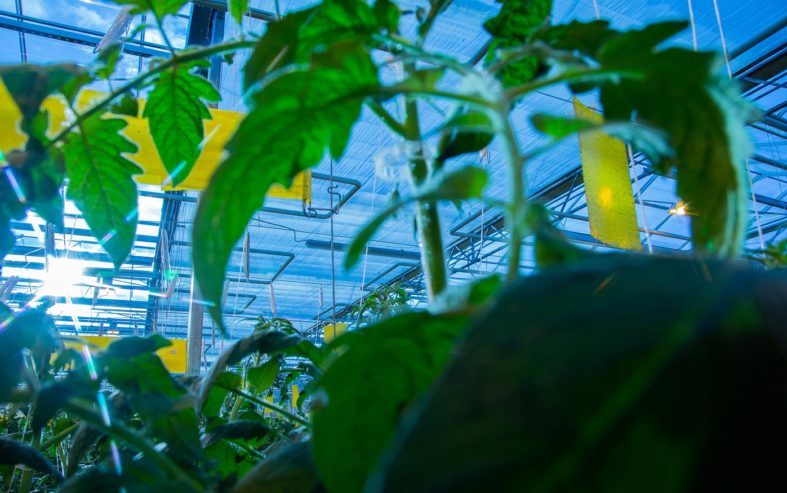 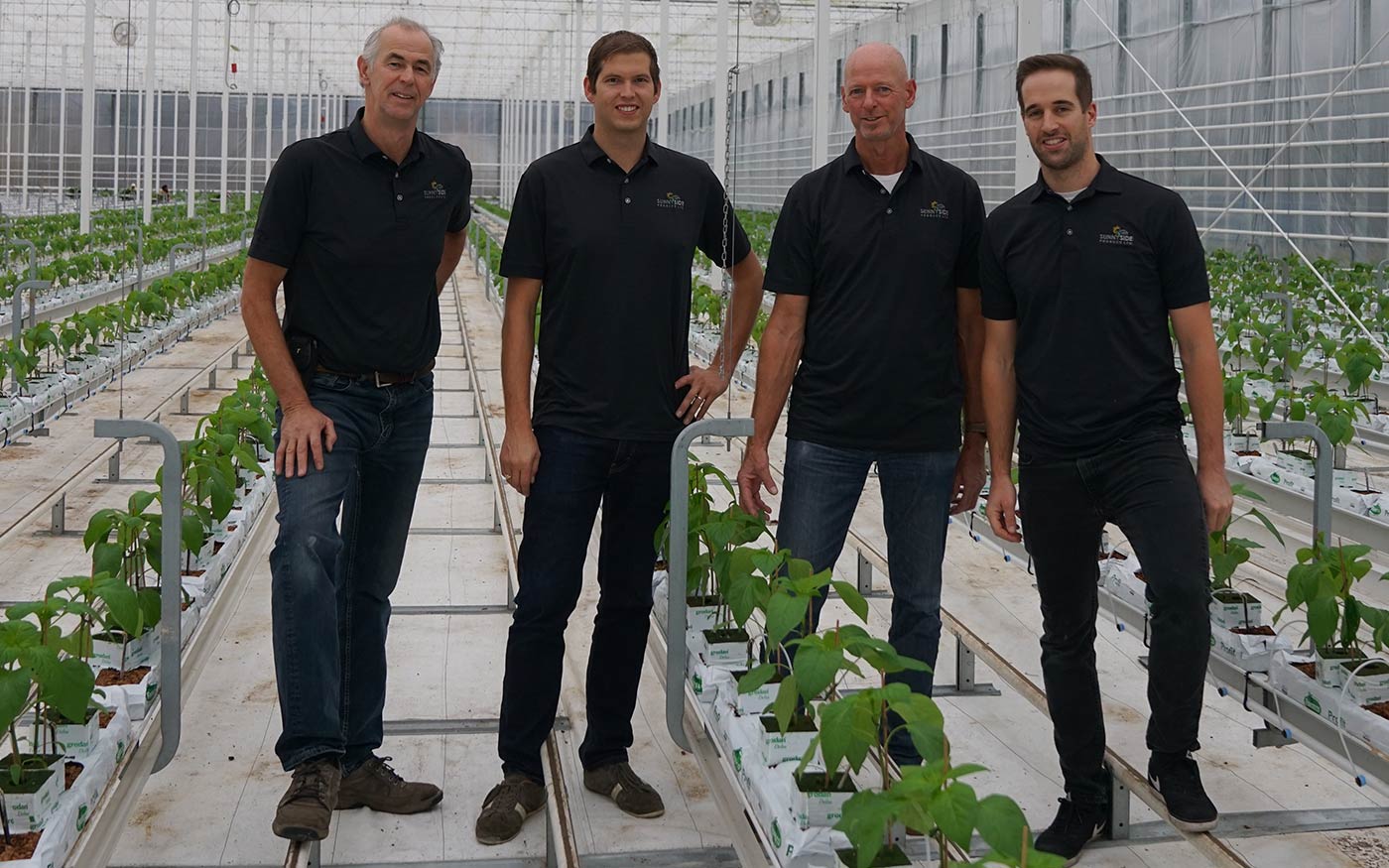 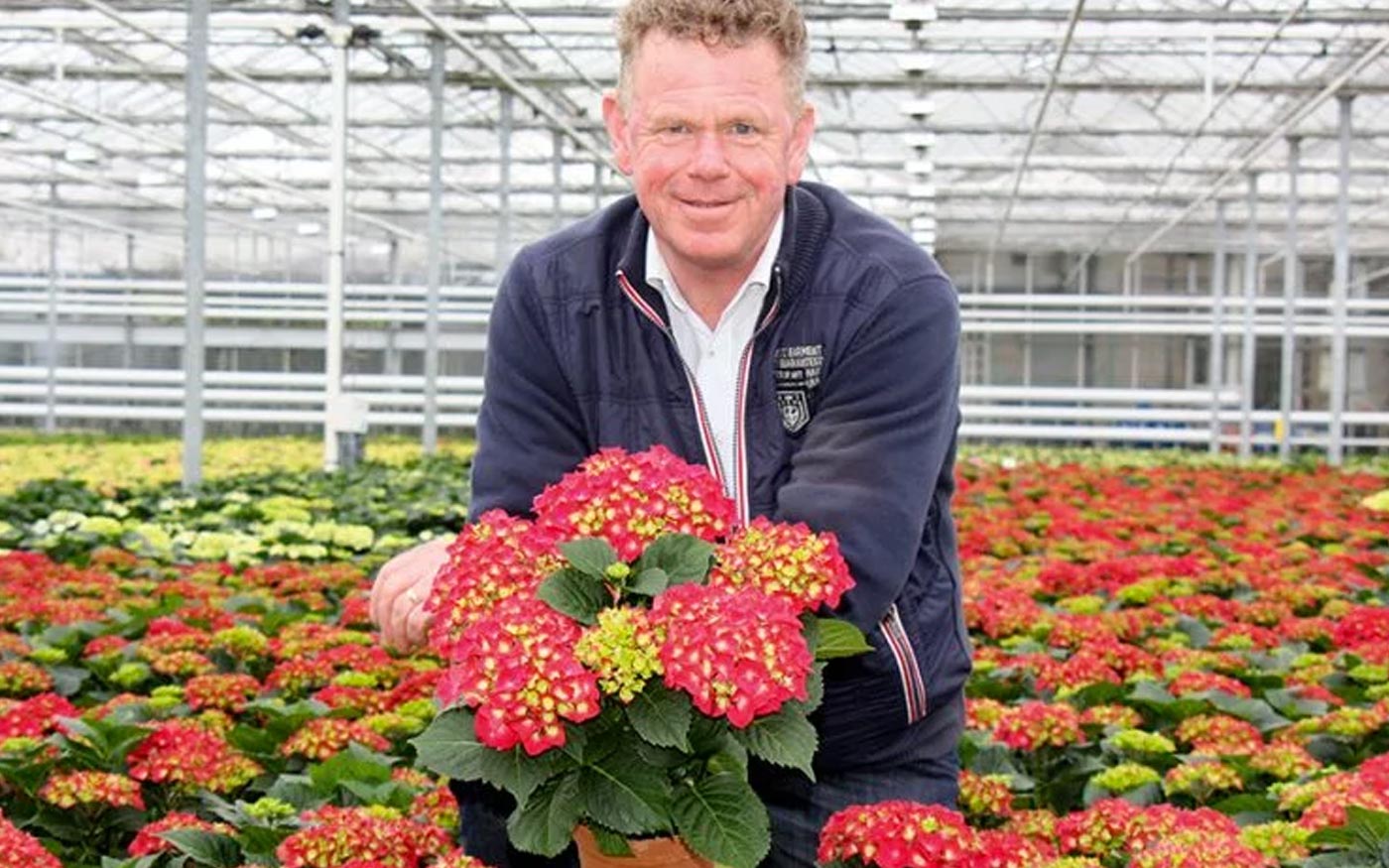