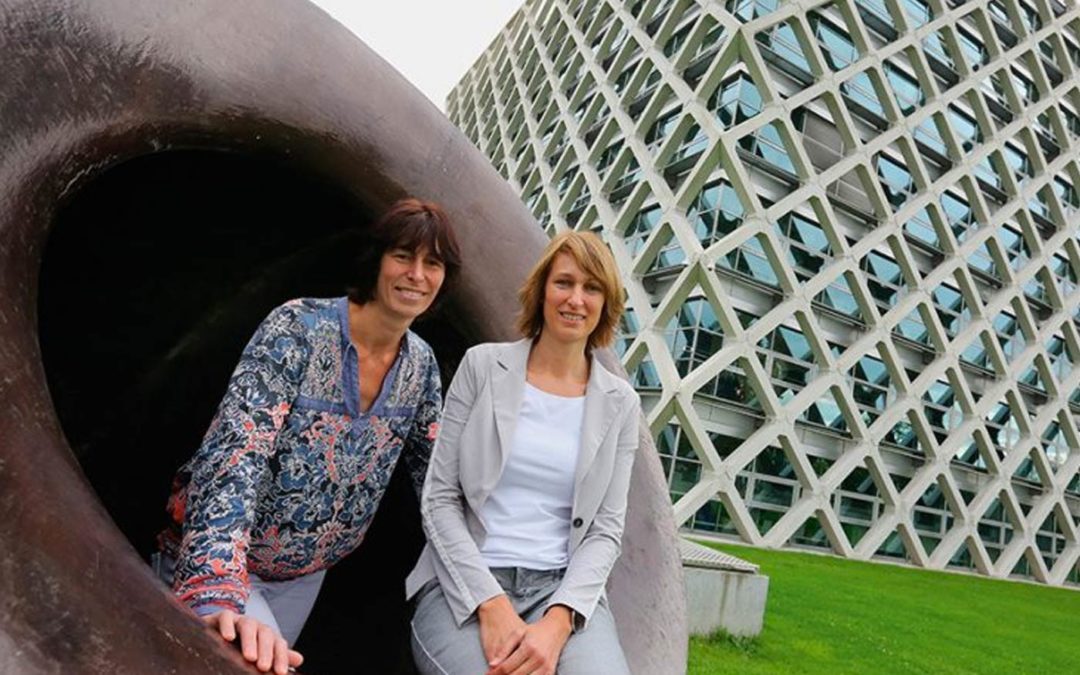 The application of LED lighting in greenhouse horticulture is still in its infancy. A few nurseries are already using LEDs, mostly red and blue. But still little is known about how the different light colours work precisely on the physiology of the plant. Research by Wageningen UR Greenhouse Horticulture in the Netherlands shows that blue and green LEDs can be used to steer a crop. A large greenhouse trial should give insight into how this can be applied in practise.

The European Union financed the research that was carried out by Anja Dieleman and Esther Meinen between September 2014 and July 2015. Dieleman puts it into context: “It is part of wider, innovative, EU-research into how LED-lamps can be applied, for example, in the work environment and in museums. Together with a Spanish Institute, we examined the possibilities within greenhouse horticulture. The question was, ‘How can light colours steer a crop in its growth and development?’ The ultimate goal is to develop a dynamic light formula for plants.”

While almost only red and blue LEDs are used in horticulture, the first part of the research, carried out at the end of 2014, considered six colours: White, amber, red, blue, green and red/blue. Each colour has its own light spectrum, ranging from 400 to 700 nm. Hortilux supplied the specially manufactured lamps. Young tomato and pepper plants were chosen for the trial as these are very common crops.
Meinen: “We began very straightforwardly, purely to understand how the colours work.” In six compartments of 4.5 m2 the plants received 200 µmol/m2/s (micromol photons per square meter per second) of LED light of a single colour in addition to a small amount of daylight, averaging 4 per cent over the whole day, for period of 15 hours. “In this way we could best see what the light colour did to the plant.”

Steer with blue and green

Measurements were taken after three weeks which included plant length, leaf stretch, light absorption, photosynthesis and growth. The photo of six tomato plants shows very well where the largest effects occurred. Blue light (second from left) led to the plants becoming shorter and lighter in weight, the stomata were the most open and the leaves were the darkest in colour. “Although the growth lagged behind, blue LEDs do have potential as a means of steering growth. We measured a relatively high level of chlorophyll which is favourable for photosynthesis. And sometimes growers actually want compact growth,” explains Meinen.
Green light led to the tallest plants, the largest leaf surface area and leaves with an open structure. Dieleman: “It’s very interesting, because in general it’s thought that green light does little for the plant because green light is mostly reflected. It turns out that, just like far red light, it has a considerable effect on stretching of the crop. The effects of the other colours were similar to that of white light.”

Because green and blue light had the most distinct steering effect, the second part of the trial, that took place between March and July 2015, concentrated on these two colours. Bearing in mind the light formula should ultimately be applicable in practise, it was decided to use a limited period of blue or green steering light at lower intensities.
The researchers started with blue LEDs. In addition to a control with white light they tested three options namely two hours blue light in the morning with an intensity of 20, 100 or 200 µmol/m2/s. For the rest of the day the plants received ‘standard’ red/amber light. The idea was that the plants would create more pigments which could be used later in the day for photosynthesis. Was this true?
They saw a clear line. At 20 µmol/m2/s there was no visible positive effect, at 100 µmol/m2/s there was a small increase in the production of pigments and at 200 µmol/m2/s there was a distinct effect. The photosynthetic capacity was the highest in plants that received 200 µmol/m2/s blue light in the morning. “The dry weight and leaf surface area of the plants that received two hours of blue light was similar to those in the control treatment,” says Meinen.

To test the effect of green light, the researchers also set up three trials in addition to a control treatment with white light. They exposed the plants to two hours of green LED light at various times of the day: in the morning, late afternoon and at the end of the day. In all cases the light intensity was 50 µmol/m2/s. For the rest of the day the plants were exposed to ‘standard’ red/amber light.
Here too, the results were positive. With just two hours of steering light, in all three situations the crop was more open and taller while the dry weight and leaf area of the plant were comparable with those in the control treatment. “The most notable feature was the different, more open leaf structure. With the same leaf surface area the leaves were larger in size. That can mean that light is better able to penetrate the crop. Did the time of day have an effect? From this trial it doesn’t seem to make any difference,” says Meinen.

In short, just two hours of blue and green ‘steering light’ per day is enough to change the morphology of the young plant. But what is the effect on flower and fruit development? Dieleman: “We couldn’t examine this in these experiments. Therefore in spring 2015 we started a larger greenhouse trial in Bleiswijk, that covers a complete winter crop of tomatoes. One area is the control in which we only use red LED lights. The other treatments use 50 µmol/m2/s of blue light and green light for a few hours during the morning. The main lighting for the rest of the day is red LED light. For all treatments we look at the effect of plant development, flowering, fruit development and quality.”
In the area with blue light the researchers are looking specifically at photosynthesis and in the area with green light they are looking at the openness of the crop and how that affects light interception. “Originally we wanted to test a single light formula comprising different colours. We’ve deviated from this in this trial because the effects of blue and green light are opposite. Therefore we’ve kept them apart.”

During the trial growers were interested in the results, even though the cost of LED lighting is still quite high. “Some tomato growers are already using LEDs, mostly red and blue. Plant propagators, ornamental and pot plants growers are also interested in using LEDs to steer growth, for example as an alternative to using growth retardants. However, we still have to gather much more knowledge about the exact effect of light colours,” says Dieleman. Meinen adds: “Therefore in the following trial we will take lots of measurements to understand the underlying plant processes.”

A trial has shown that it is possible to steer the growth and development of young tomato and pepper plants by using blue and green LEDs. A comprehensive follow-up trial with a winter crop of tomatoes should show what effect these colours have on fruit development. The ultimate goal is a dynamic light formula for optimal steering of the plant. 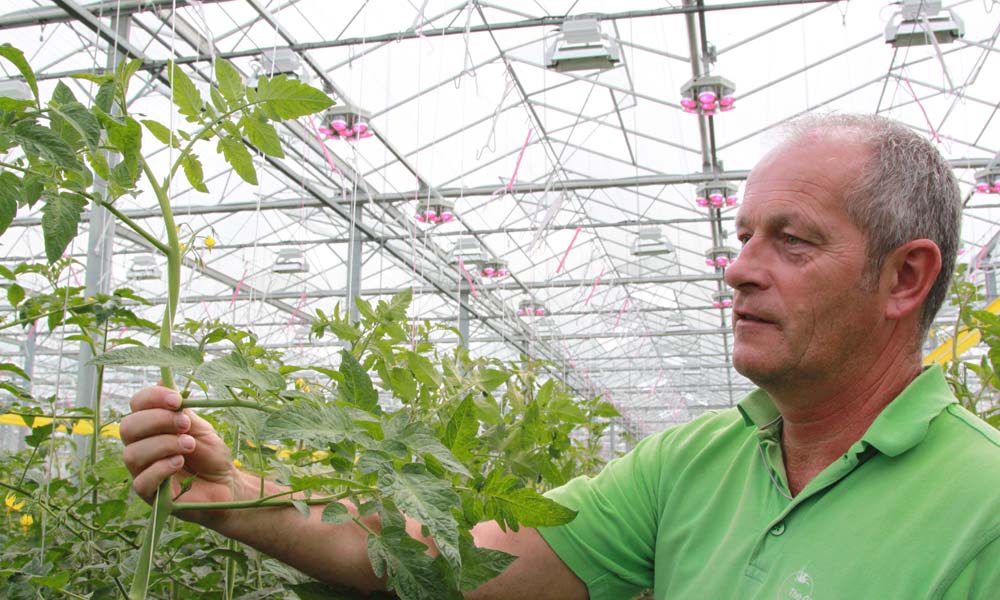 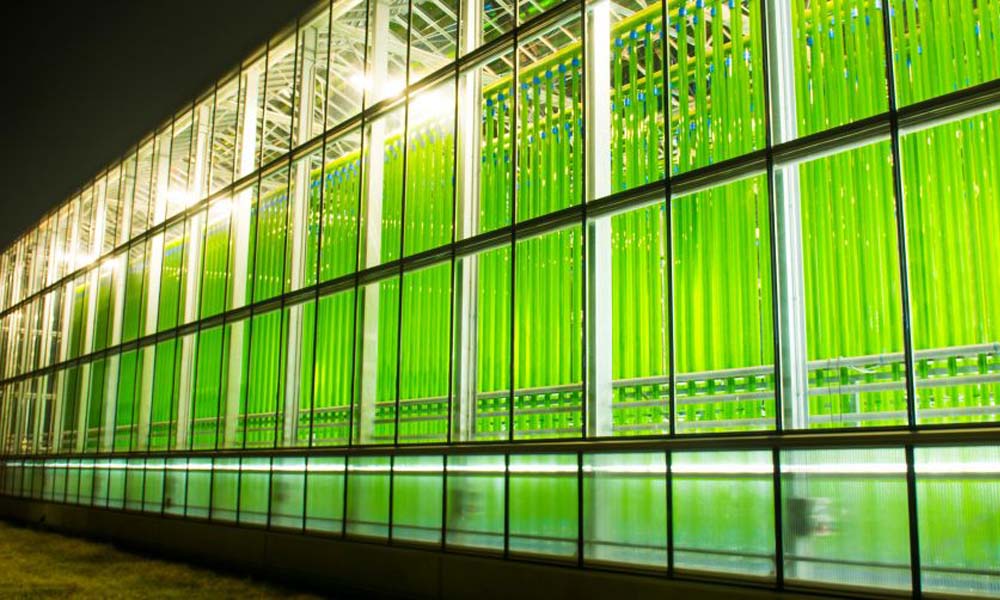 Eparella opens one of world’s biggest algae greenhouses in Austria 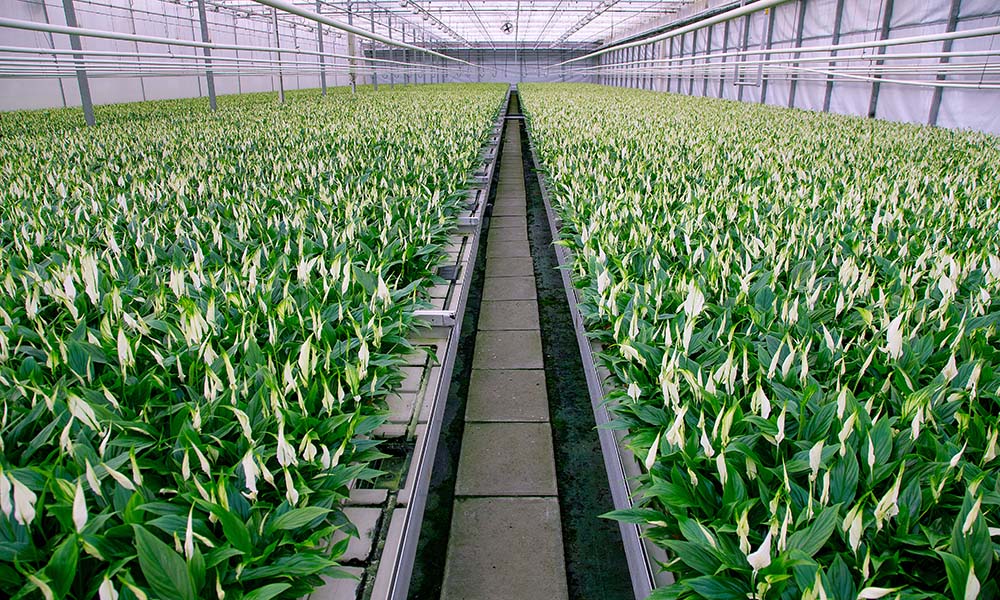 When each leaf counts, leaf samples can point to plant’s needs