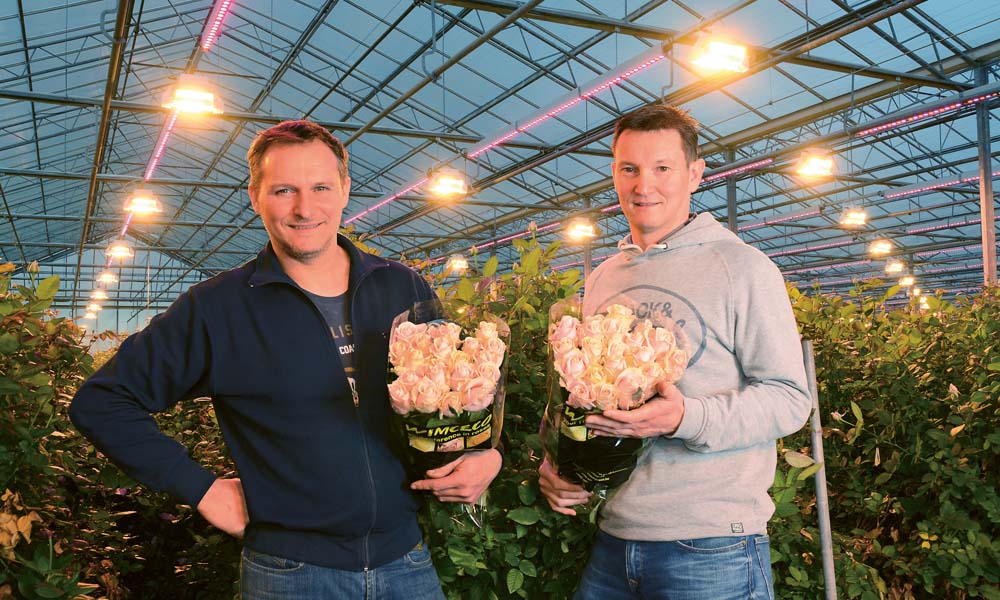 Completely separately from one another, two Belgian rose growers with premises barely ten kilometres apart came to the conclusion that a combination of SON-T and LED top lighting is the best solution for their nurseries. This makes them the first rose growers to use hybrid top lighting. Since then, other growers from as far away as Russia have come to take a look.

Electricity is expensive in Belgium: it costs around € 35-40/MW more than in the Netherlands as a result of higher transmission and distribution prices. So it makes sense to generate as much as you can yourself and buy in as little as possible. This was a key factor in growers Rozen Scheers’ and Wimceco’s decisions to install combination lighting.
Both nurseries were looking to upgrade their partly outdated systems and were thinking about how to do so without having to start buying in a whole lot more electricity. At Scheers they were able to increase the light level from 100 to 150 µmol/m2/s using exactly the same amount of power. Wimceco went from 130 to 180 µmol/m2/s with a modest additional input of 150 kW.

Wim and Annelies Scheers’ nursery Rozen Scheers in Kontich in the province of Antwerp has 3.8 hectares of glass. They have 15 varieties in their product range: popular roses such as Avalanche and Red Naomi along with special varieties like Jumilia and Cupcake. Sales take place via Euroveiling in Brussels, but direct sales to consumers are also an important channel.
Wimceco in Boechout, also in Antwerp province, grows Avalanche and Sweet Avalanche on 1.75 hectares. They also grow a few lesser varieties to vary sales to consumers. Their roses are auctioned at Euroveiling in Brussels and FloraHolland. Co-owner Danny van Nuffelen: “Our lamps and reflectors needed replacing as their output was dropping. We wanted to increase the light level but we didn’t want to buy in too much electricity.”
That could be done by combining SON-T (HID) with LEDs, but no growers had ever tried this combination with cut roses before. “That’s why our suppliers Agrolux advised us to go and visit Leo van der Harg, a pot rose grower in Vierpolders in the Netherlands. He has been using a hybrid system since 2014. His experience went some way to removing the uncertainties – after all, he is also a rose grower. What’s more, our starting point was that a photon is a photon, no matter what kind of lamp it comes from,” he explains.
At around the same time, Wim Steeghs of Philips Horticulture LED Solutions suggested setting up a trial with hybrid lighting at Rozen Scheers. That was when Wim Scheers first heard that his colleague ten kilometres down the road had similar plans. He also went to visit Van der Harg.

A complete switch to LEDs only was not on the cards. “That really is too new and would be much more expensive. Also, you would have to completely revisit your climate control because you wouldn’t have the extra heat from the HID lights,” Van Nuffelen says. “And anyway, LED light on its own is too red to work in. No research has been done yet into what effect that has on people. It looks very dark.” He and his brother Bart decided on a 50/50 split between HID and LED. The lights hang in the same line: three LED fixtures followed by one 1,000 W SON-T.
Fellow grower Scheers uses LEDs for 70% of the light and SON-T for 30%. “We have two CHP units of 1.6 and 1.2 MW. We wanted more light but without using any more electricity. That’s why we decided on this combination. We have two continuous lines of LEDs in each bay interspersed with one HID reflector every metre.” The system is fitted in a 1.5 ha greenhouse which makes up 40% of their total greenhouse area. It was installed by Dutch B-E De Lier. In both cases, the LED fixtures are Philips GreenPower LED top lighting.

The availability of a subsidy from the Flemish Agricultural Investment Fund (VLIF) made the decision on the high investment costs a little easier. Nominally, the VLIF contribution for LED systems is 30% of the investment costs, but it works out at less than that in practice on account of special conditions such as a cap on the investment amount per square metre. The ultimate support percentage is around 20-25%.
The systems were installed in November 2015, so the growers now have well over a year’s experience with hybrid lighting under their belts. They are reckoning on a payback time of 4-5 years.

The HID and LED lights at both nurseries can be switched on and off separately. Van Nuffelen: “This has made us more flexible. The LEDs are left on until there is around 250 W of daylight; the HID lights are switched off earlier. So the LEDs were on for 890 hours longer than the HIDs last year.” Fellow grower Scheers used his LEDs for 1,100 hours more than the HID lamps.
When switching to LEDs, a big question is whether or not the radiated heat from the HID reflectors needs to be compensated for. That can have advantages and disadvantages. In theory, the grower needs to ventilate less to get rid of surplus heat. This is less of an issue in Belgium than in the Netherlands because light emissions don’t yet have to be controlled with blackout screens, so Belgian growers are spared the situation in which the temperature under the closed screen rapidly gets too hot. Because the nurseries kept no records of how long the vents were open, it is difficult to comment on this. Moreover, the light level was higher in the new situation in both cases, making it difficult anyway to draw a comparison with the previous situation.

On the other hand, the radiated heat can be a welcome way of preventing the head from cooling down compared with the rest of the crop. “We can use top heating to compensate for the heat from the HID reflectors. In theory the crop should cool down quite a bit in the new situation, but our measurements show that the temperature didn’t drop as much as we had anticipated,” Scheers says.
Advisor Steeghs has an explanation for this. “LEDs also provide some indirect heating. They are 55ºC and transfer their heat to the aluminium profile. That transmits the energy to the light and water in the greenhouse via longwave radiation. The crop isn’t warmed up directly but indirectly.”

A trial with 100% LED top lighting above Red Naomi has been running at the Delphy Improvement Centre in the Dutch town of Bleiswijk since April 2016. The light level is 200 µmol/m2/s and OPAC heat exchangers keep the temperature at the right level. Steeghs: “Before the trial the growers had said that they needed the radiated heat from SON-T and that 100% LEDs would not produce good results. But so far the plants have been growing very well.”
The results achieved in Bleiswijk in the summer and autumn were surprising: heavy roses with a long stem, a consequence of the lower bud temperature due to the reduction in radiated heat combined with the cooling properties of the OPAC heat exchangers. Outside the trial, growers were having trouble getting good stem lengths in the warm autumn. It remains to be seen what the results of the trial in the winter will be.

A year on from the investments, both growers are happy with their decisions. Van Nuffelen: “The system has definitely lived up to our expectations. We have an older crop but it is in better condition this year than last year and has survived the summer better. A big advantage of this system is that it makes you more flexible: you can go on lighting for longer on a hot day with LEDs without pumping in heat from the HIDs.” At the time of writing he was unable to say how much more production he was getting with the higher light level.
At Rozen Scheers the figure was 20%, with 30% for some varieties. “That is much as we expected, but it could be even more. We are trying to grow as organically as possible but we had a lot of trouble with thrips last year and we had to cut out unsaleable product. Once we have that under control, production will be up,” he says.
Convinced by the results, in early November he had exactly the same combination installed in another 1 ha greenhouse, again with a 70/30 split between LEDs and HID reflectors. This time the lights were supplied by Agrolux. The way the system is connected up means that his large CHP unit can power the LEDs throughout the whole nursery and the other unit can be switched off when only the LEDs are on.

Scheers plans to replace another two older low greenhouses in the future. As there is a stream running right behind the greenhouses, the authorities have made it a condition that he makes a contribution to solving the flooding problems in the area. His fellow grower in Boechout will be changing the old crop first. A new greenhouse may be added in the future.
In the meantime, there is a lot of interest from other growers: sometimes entire coachloads drop by. Philips regularly gets enquiries from Russian rose growers who want to see the impact of hybrid lighting on the crop in practice.

Belgian nurseries Rozen Scheers and Wimceco are the first cut rose growers to install hybrid top lighting. Their decisions were influenced by the high cost of electricity, subsidies and the ageing of their previous systems. Initial experience is good: production is up as a result of the higher light levels and the heat produced by the HPS lamps can be easily compensated for. Scheers has just installed the same system in a second greenhouse. 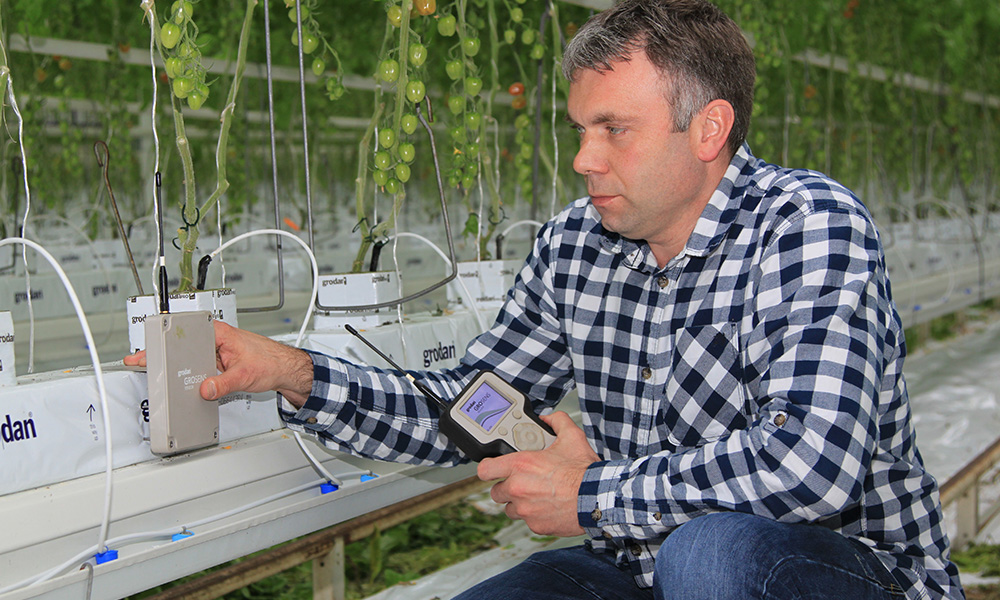 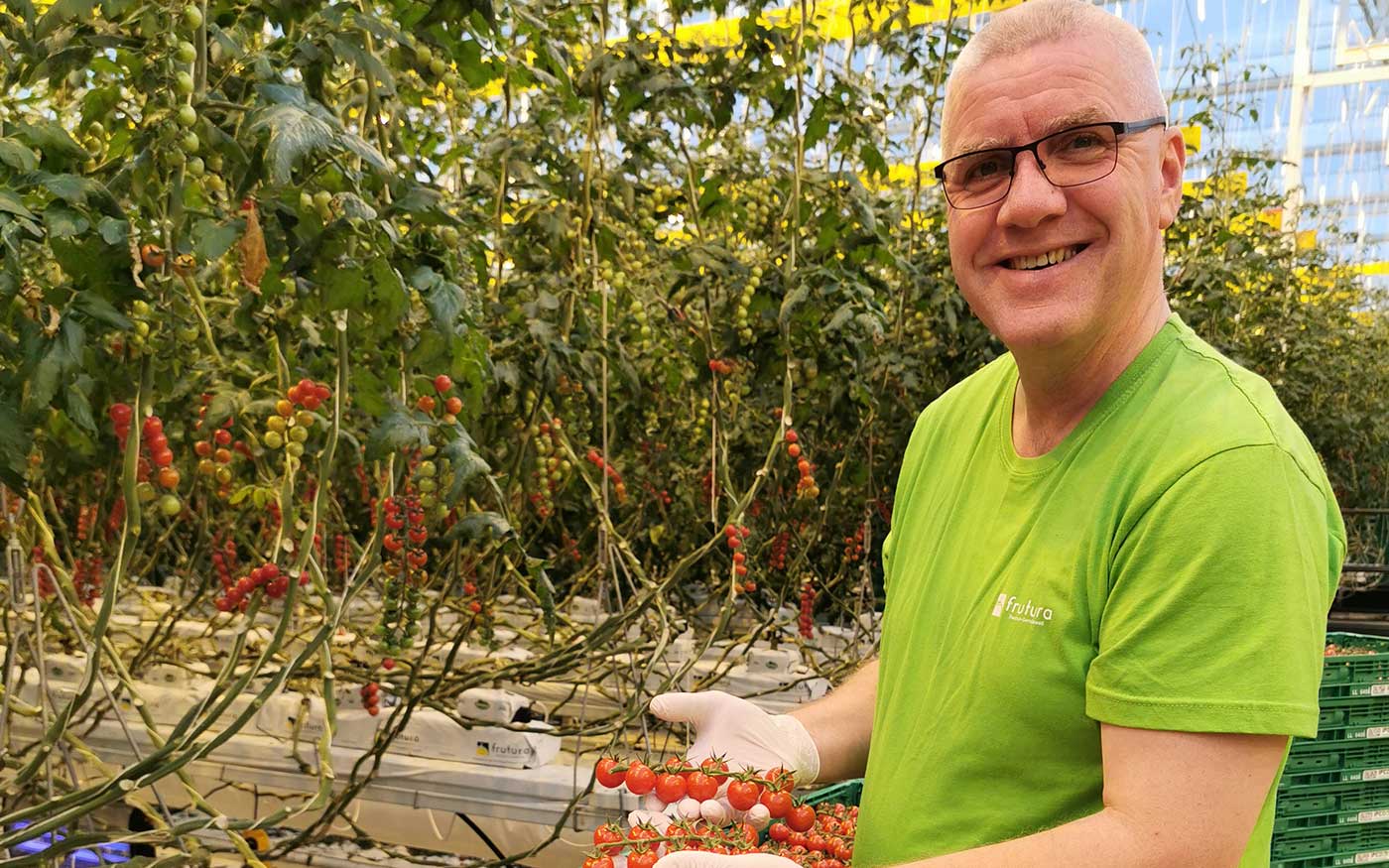 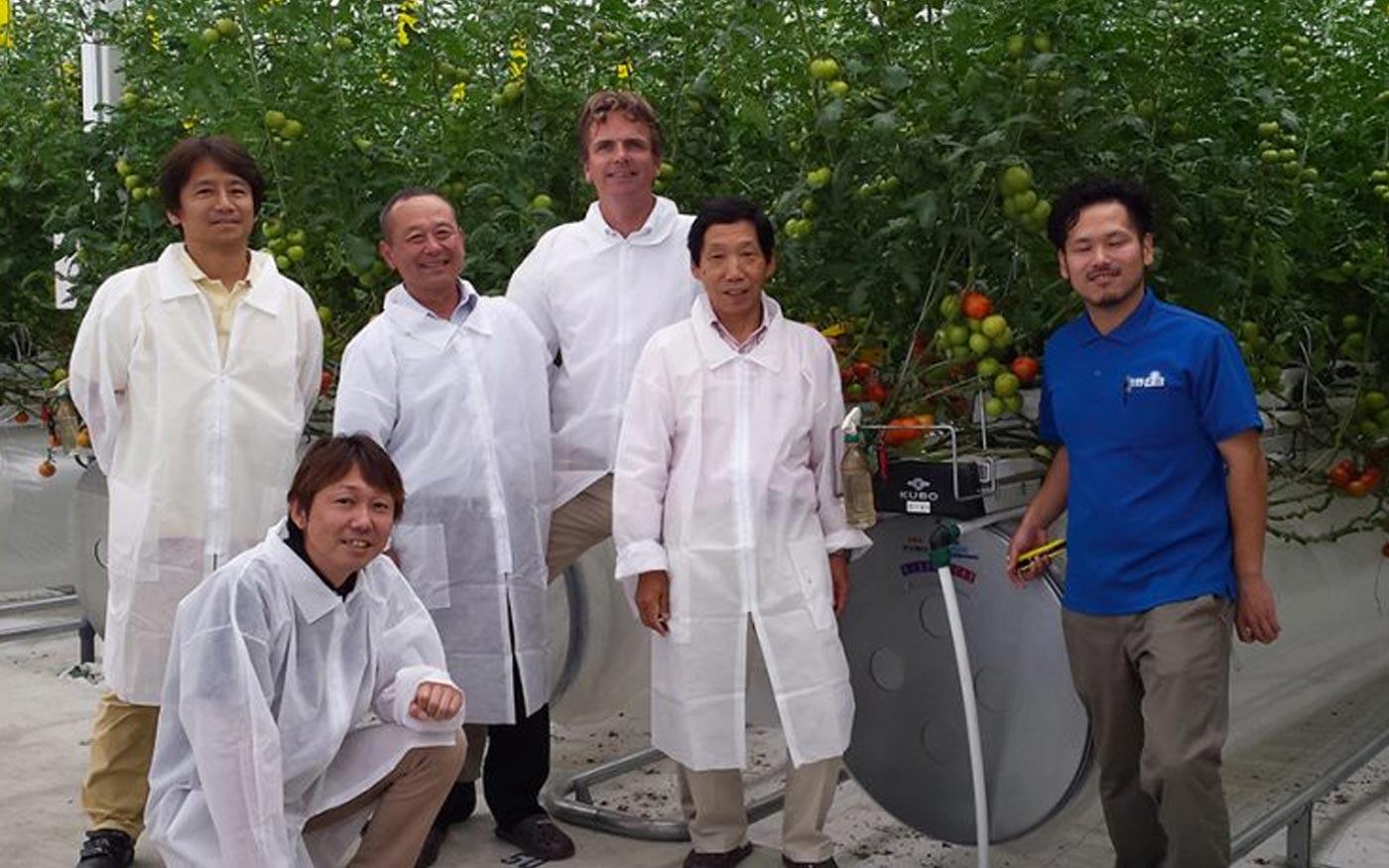