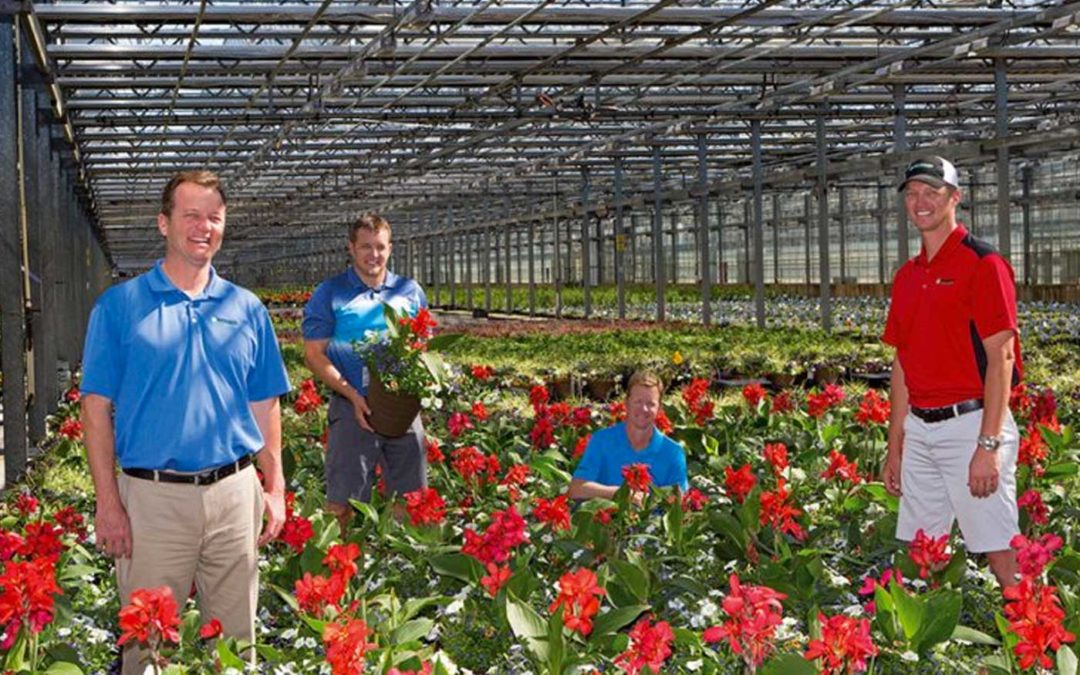 Constant innovation is the key to Metrolina Greenhouses becoming one of the largest and most successful greenhouse growers in the USA. For over four decades the family-run enterprise has continued to invest in technology including robotics, data analysis and logistics. It produces around 700 species and is currently laying the foundations for further expansion to keep up with market demand.

The 68 ha of glasshouses in Huntersville and the 70 ha for outdoor cultivation in York, North Carolina, are a far cry from the 1860 m2 that Tom and Vickie van Wingerden bought in 1972. With 5,000 dollars in their pockets the Dutch couple had just emigrated from the Netherlands to start their American Dream. Today the business is run by their four sons and has a turnover of over 200 million dollars. It produces 110 million seedling and cutting plugs per year which in turn produce 7 million hardy chrysanthemums; 6 million summer annuals; 5 million hanging baskets; 3 million poinsettias; 1.8 million bedding plant trays and 11 million perennials. And each year 5% of sales are made up of new items.

But the company is not resting on its laurels. Tom van Wingerden’s motto was ‘the absence of innovation means stagnation’ and with that front of mind the family continually invests to improve all greenhouse processes. “In our newer greenhouses we have rolling tables and benches, cranes and spacing machines doing all the work,” says Thomas van Wingerden, one of the brothers with responsibility for operations. “Trays are placed on the production line and are not touched by human hands until they are put on a shipping cart. In some of the older greenhouses, someone has to push the tables around but no one has to touch the plants,” he says. The company employs around 600 full time hourly people, 150 salary and 750 to 1000 seasonal staff.
Metrolina is without doubt extremely modern: Technology is king and the brothers collaborate with highly innovative suppliers from across the globe. But with their Dutch roots it goes without saying that they acquire much knowledge and expertise from the Netherlands. They recently invested in a new sticking machine which was manufactured for them by the ISO Group. “We wanted a machine for difficult varieties such as calibrachoa and verbena and for very small cuttings that are difficult to stick by hand,” says Thomas van Wingerden. The ISO Group, of the Netherlands, had such a machine for chrysanthemum cuttings which it was able to develop further. “The machine does a much better job than we can do manually because all the cutting are stuck uniformly so we have a much better success rate.”

Ahead of the game

Trying something new is part of the family’s philosophy. “We always want to be ahead of the game so if there is something better out there we want to have it.” That’s why they are currently replacing about 12 ha of shade screens with Svensson Harmony diffuse screens which should be in place by 1 February. “We’d seen the new screens at shows and after discussing it with our growers we felt they would be worth trying in our lower-light greenhouses. They should give better light than the Solaro 50% screens, which have an open structure to enhance ventilation and offer 50% shade. These are currently installed on 60 ha and double up as energy curtains which has led to significant savings,” says Van Wingerden. “We have also installed blackout curtains on 40 ha of glasshouses. These not only block out the light they are used for insulation too.”
The summers in Huntersville are humid and temperatures range from 32ºC, down to 15 to 21ºC. The winters, however, can be cold. Average winter temperatures range from the 4-7°C). The greenhouses in Huntersville are heated by four 8 MW woodchip boilers which were installed about seven years ago when natural gas was expensive. Although the gas prices have dropped, the woodchips, which come from a 50 mile radius, still make good business sense, he says. “They are still cheaper than gas and they are renewable so it’s better for the environment.” About 60 ha of the greenhouses have hot water pipe floor heating that has a capacity for some 19 million litres.

While 6 ha of greenhouses are Venlo types with fan and pad cooling the majority are MX open roof greenhouses. As new houses have been added over the years they have become taller, the highest being 6.7 meters, to accommodate the robotic cranes that lift and move the trays of plants and the sprayer crane, another innovation that has improved efficiency. “The electrostatic sprayers put an electric charge on the chemical particle so that it sticks on the underside of the leaf where the bugs tend to hide. It is much more efficient: We use at least 50% less chemical product than previously but get the same coverage.”

About 48 ha have ebb and flood floors and the water is recycled in a closed system. The other 20 ha have a traditional system and the water returns to ponds for recycling. These ponds cover some 10 ha which collect 15 million litres of water for every inch of rainfall, says Van Wingerden. “We get about 45 inches of rain per year so we have plenty of water and we’ve not suffered any water shortages over the past ten years.” That’s saying something because the Huntersville facility consumes a staggering 5.7 million litres of water per day.
All the water is filtered and for the last three years has been sanitised using ozone. “We originally filtered to 150 microns and step by step reduced this to a finer filtration of 5 microns. The next step was ozone,” he says. It made such a positive difference that the system is being upgraded and will be used more widely. “Our plants are much healthier with better root systems which has allowed us to reduce the crop cycle. For example, we have been able to reduce the production time for poinsettias by four weeks and spring crops by two weeks. Although general improvements in growing techniques might have helped we certainly feel that the cleaner water has been largely responsible,” he says.

This typifies Metrolina’s philosophy of wanting to do better every day. It’s a strategy that is extremely reliant on data. “We record and analyse everything,” says Van Wingerden. “We employ at least 15 analysts who analyze everything going on in the greenhouse and connect it via the inventory management system to data from the stores. We have to make sure that all the numbers adds up. Our in-house database is updating information from every crop all the time. We use this information to speed up or slow down crops if we notice that plants are ahead or behind schedule. We can create about 50 different climates and with the additional use of artificial lighting we can ensure that crops hit their schedule dates.”
The database platform connects production planning, finance, replenishment and inventory management right through to shipping. They supplies three customers: Lowes (359 stores), Walmart (881 stores) and HomeDepot (150 stores, perennials only). The stores provide daily sales numbers so they knows which items are selling well. “Our analysts then decide what to ship to which stores the next day, a system that also requires an extremely innovative logistical solution, including 160 of our own trucks. Not only are we a producer of plants we also take care of the end-to- end process right up to sales to remove the hassle for our buyers.”

New greenhouses continue to be built. “Our customers are opening more and more new stores and growing by 2% per year. We need 4 acres extra per year just to keep up with the growth of their stores so we have just started to build an additional 16 ha of glasshouses at Huntersville. These will be the MX open roof types and will be fully automated. This will take about eight years to complete but we expect to have the first crops available in two years. By then we should have completed all the concrete floors which we can use for production. The aim is to build 4 ha of greenhouses each year afterwards until it is complete.” The aim is to have a turnover of 250 million dollars by 2025.

The philosophy held by US greenhouse giant, Metrolina Greenhouses, is to perform a little better each day. It has achieved this over the last 40 years by investing in innovation. Most of its 68 ha of glasshouses are fully automated so that human hands only touch the trays of plants when they placed in the shipping truck. 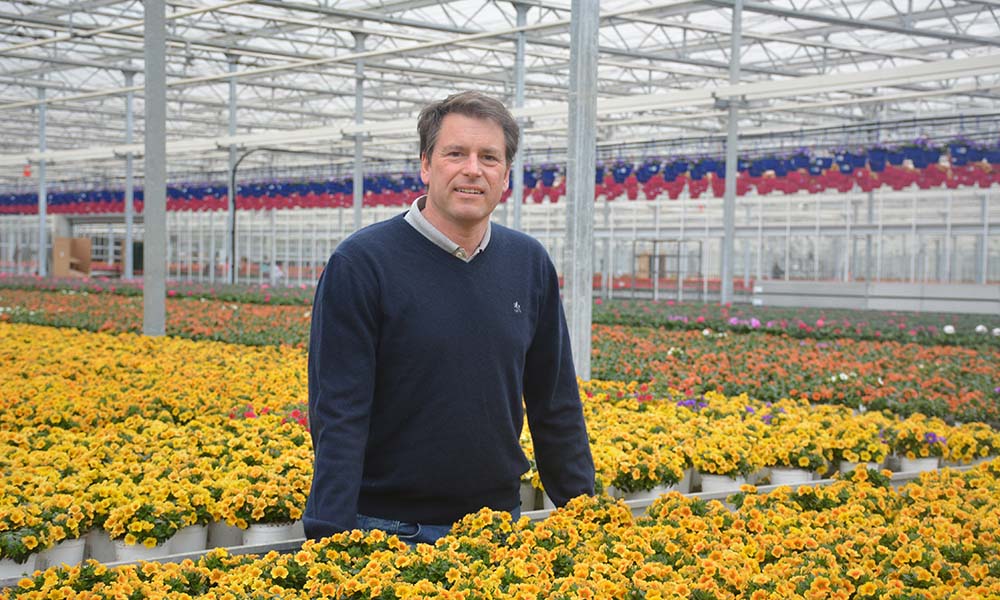 “Combination of breeding and production is key to success” 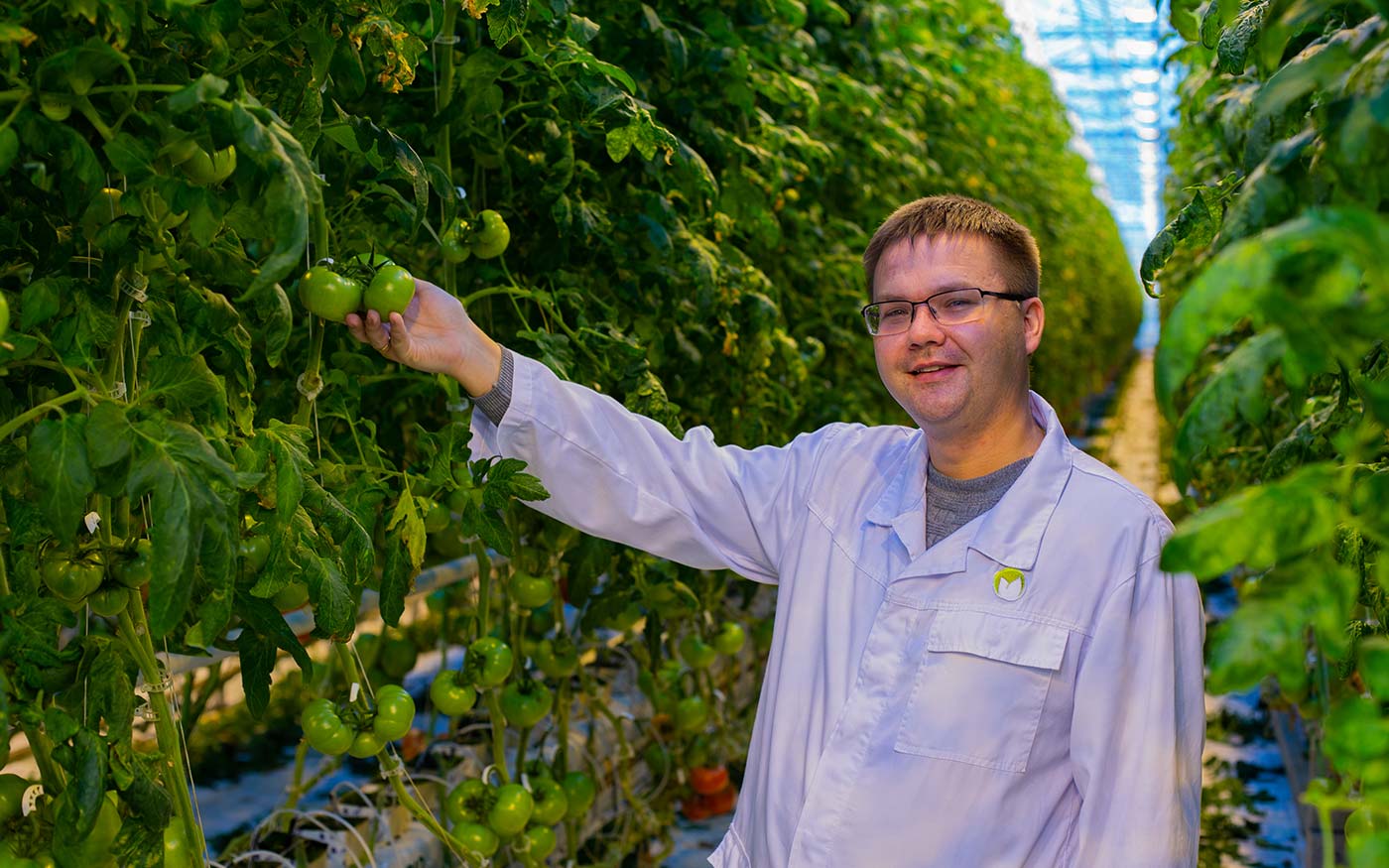 ‘Everything is focused on delivering the right quality for our customers’ 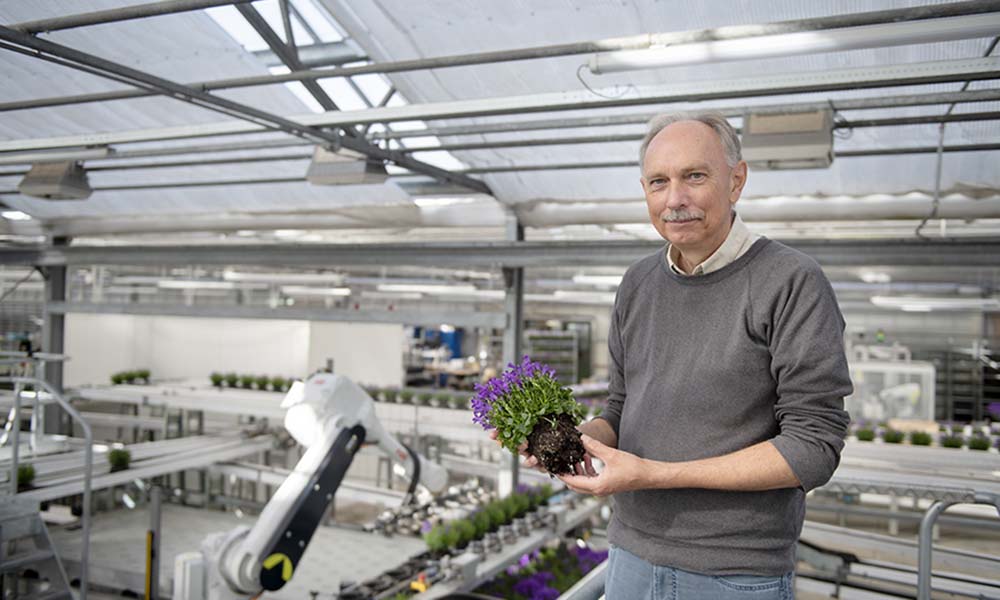