NGG profits from new insight into air movement and evaporation 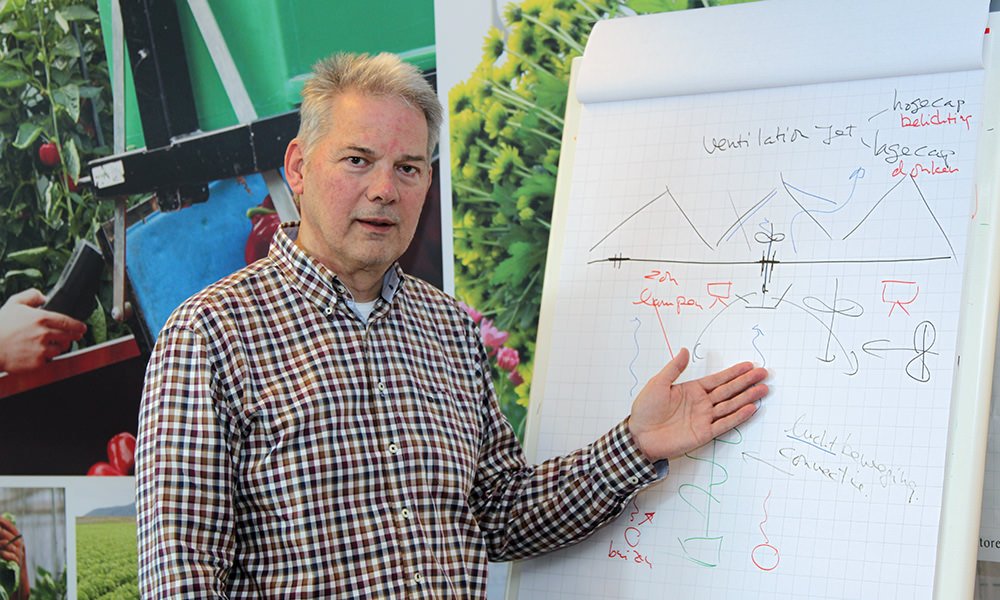 Over the last ten years the research and experience gained from Next Generation Growing has revealed many new insights about the complex relationship between air circulation, crop transpiration and plant growth. By applying this knowledge well, the crop can perform better even without the need for expensive techniques. “When the crop is at the centre of attention it automatically leads to energy savings,” says NGG pioneer Jan Voogt.

Copies of the Dutch book, ‘De basisprincipes van Het Nieuwe Telen’ (in other words The Basic Principles of Next Generation Growing which contains some 150 pages) are selling like hot cakes. Quite rightly it sets a new standard. Hundreds of copies are now circulating among growers and advisors in digital or print format. The creators are also considering publishing an English version. Co-author Jan Voogt (of Hoogendoorn Growth Management), who wrote the book together with Peter Geelen (of Plantmonitoring NL) and Peter van Weel (of Wageningen UR Greenhouse Horticulture), have a lot of respect for his work.
“That gives me a good feeling,” he says, sitting in the employer’s office. “And even more so if growers don’t have to invest in new greenhouses or other expensive hardware to enjoy the benefit. Any nursery can apply the principles of NGG but it does take a different way of thinking than we are traditionally accustomed to. A growing number of growers have started to recognise that. Some of them first installed new technology on a small scale to gain some experience and discovered that you can apply the principles just as well in a standard greenhouse.”

Why was it not done in the past? The answer is obvious: Because we didn’t know then what we know now. The gap in our knowledge was among other things related to the transpiration mechanism of plants and the role that air circulation plays in that. We only started to focus on that when things in the Closed Greenhouse occurred which couldn’t be explained by the then existing models.
Voogt: “It was strange that crops in the Closed Greenhouse transpired less on sunny days than those in a normal greenhouse and on overcast days even more. Now we can explain that because we know much better how transpiration and stomata work.”
In earlier models it was assumed that the stomata were either open or closed. Now we know that the opening varies as a result of the water and energy balance in the plant. The launch of the Hoogendoorn Stomata Sensor in 2007 made it possible to accurately observe that. “From that moment air circulation was also integrated into the models,” adds the climate expert. “That was a breakthrough and the most important initiative for the further development of Next Generation Growing.”

Balance of energy-, water- and assimilates

Stomata are the central control organs through which the plant can influence three balances: the energy balance, the water balance and that of the assimilates. The energy balance relates to the supply and removal of heat by means of radiation, convection and – after some give and take of these two – transpiration via radiation evaporation (referred to in the book as whistling kettle evaporation) and convection evaporation (similar to wet bulb evaporation).
The water balance is determined by the relationship between water uptake, transpiration and the amount of water stored in the crop. The correct ratio is important for good uptake and transport of water and nutrients and of course how much the plant is allowed to increase its fresh weight. If the balance is tipped, for example, due to high radiation and low RH, then the stomata close and transpiration and CO2 uptake are slowed down.

Without describing all the background and scenarios in detail, these new insights into the dynamics of the plant balance have considerably changed the view on cultivation. “For the New Way of Growing a completely different way of thinking is required,” adds Voogt. “Is it a sunny day? Keep the windows closed as much as possible because then more moisture and CO2 remain in the greenhouse. At a high RH the plant can better maintain its water balance and the stomata in the leaves stay open wider so the crop takes up more CO2 and speed of growth increases.”
Previously, ventilation was based almost exclusively on the greenhouse temperature. When the radiation was high the windows were opened wide to remove the surplus energy, but the crop could only maintain the associated high level of transpiration for a short time. As a result the RH in the greenhouse fell, the stomata closed and the crop took up less CO2, while the greenhouse temperature still often remained too high.
“The New Way of Growing takes the RH in the greenhouse much more into account,” says Voogt. “Often this can be much higher, just like the greenhouse temperature. In this way the air vents and the screen can stay closed for longer. In the end you’ll have to drain off excess moisture or energy but the critical limit lies much further away then previously thought.”

Air movement plays an important role in the microclimate around the plant. It promotes the removal of moisture that arises from transpiration by the crop and supplies energy by convention so that, in the dark period, transpiration can continue which is necessary for the uptake of, for example, calcium. Keeping the plant active by means of the fans costs less energy than using the minimum pipe rail.
An active crop with a balanced and stable plant balance can endure a lot. By monitoring the crop with greenhouse sensors and plant sensors (which these days are fairly affordable) and steering it based on this data, by screening for longer and ventilating less, the energy bill decreases while the crop becomes more productive. An indispensable tool for steering the crop is the psychrodiagram, a practical version of the Mollierdiagram. By not only looking at the RH or moisture deficit but also at the Absolute Humidity (AH), dew point and energy content of the greenhouse air compared with the outside air, it is possible to grow more effectively and energy efficiently.

Another point to consider, which previously hardly received any attention, is radiation. “In 2009 this was revealed as the cause of flower head rot in gerbera,” says the NGG pioneer. “Until then it was thought that a high RH was the main culprit. Due to radiation the plant temperature at the top of the crop can fall to several degrees below the greenhouse temperature, so that transpiration comes to standstill and moisture condenses more easily. The message from this is: close the energy screen in good time and keep it closed for longer. The top of the crop remains more easily at the right temperature, the plant grows better and receives more nutrients. This is true for most crops.”

Ongoing insight into the mode of action of transpiration and plant balances has led to a different view on cultivation and climatic control. As long as plants are in balance and the stomata are open, so that transpiration can continue, they remain more active even when the RH and greenhouse temperature are higher. Thus the air vents and screens can stay closed for longer, the crop takes up more CO2 and energy is saved. This is sustained by good air circulation in the crop. 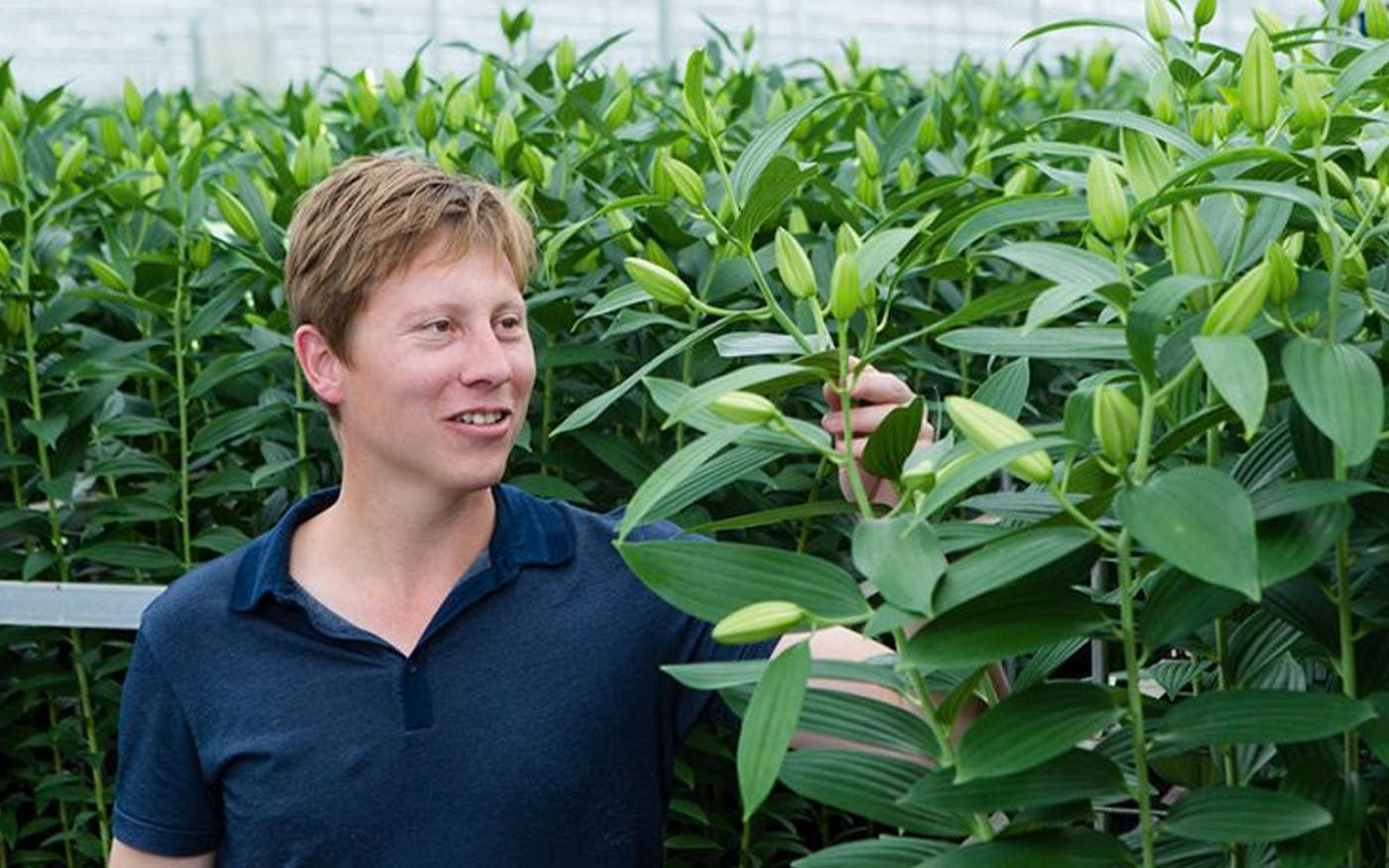 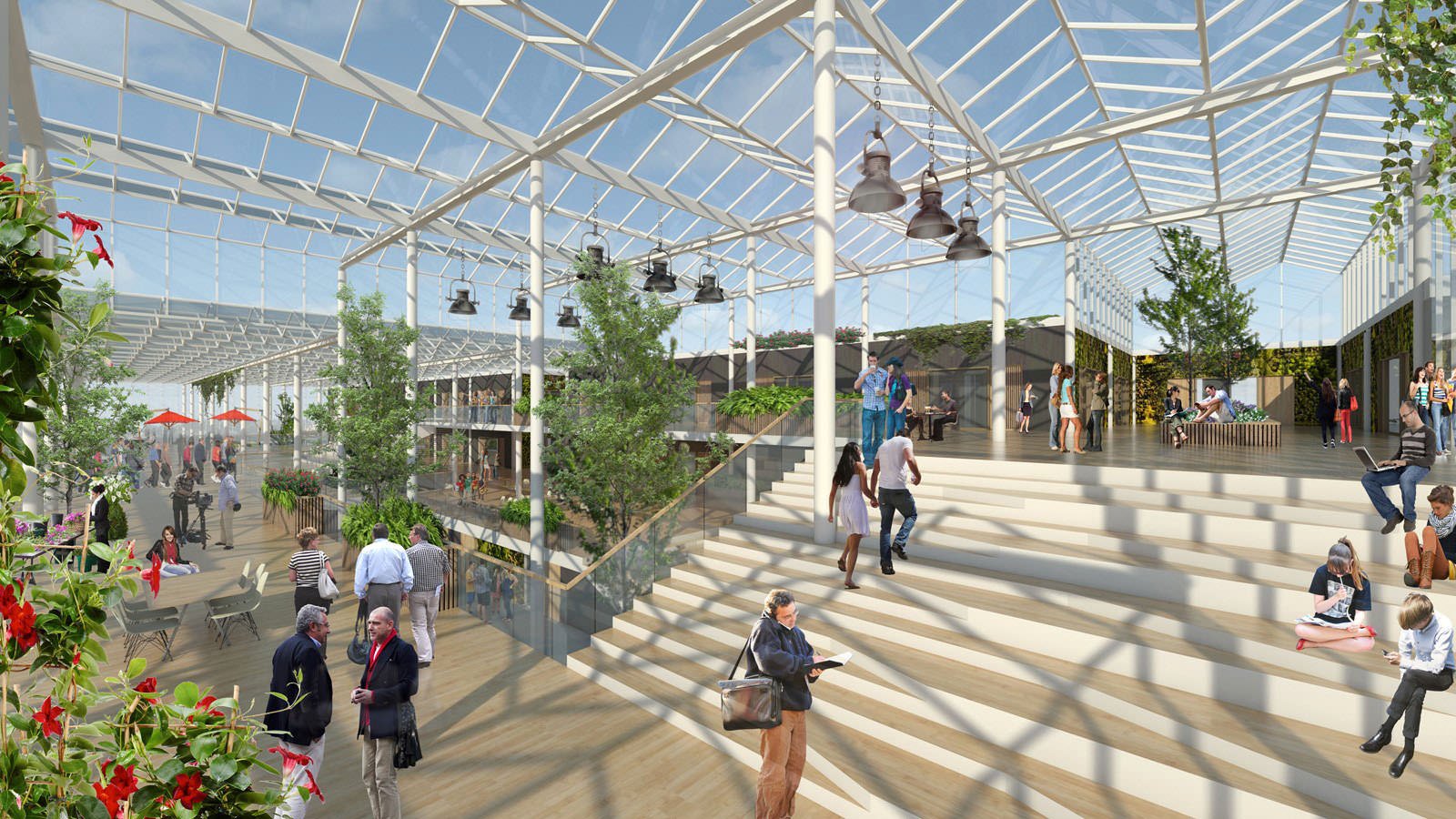