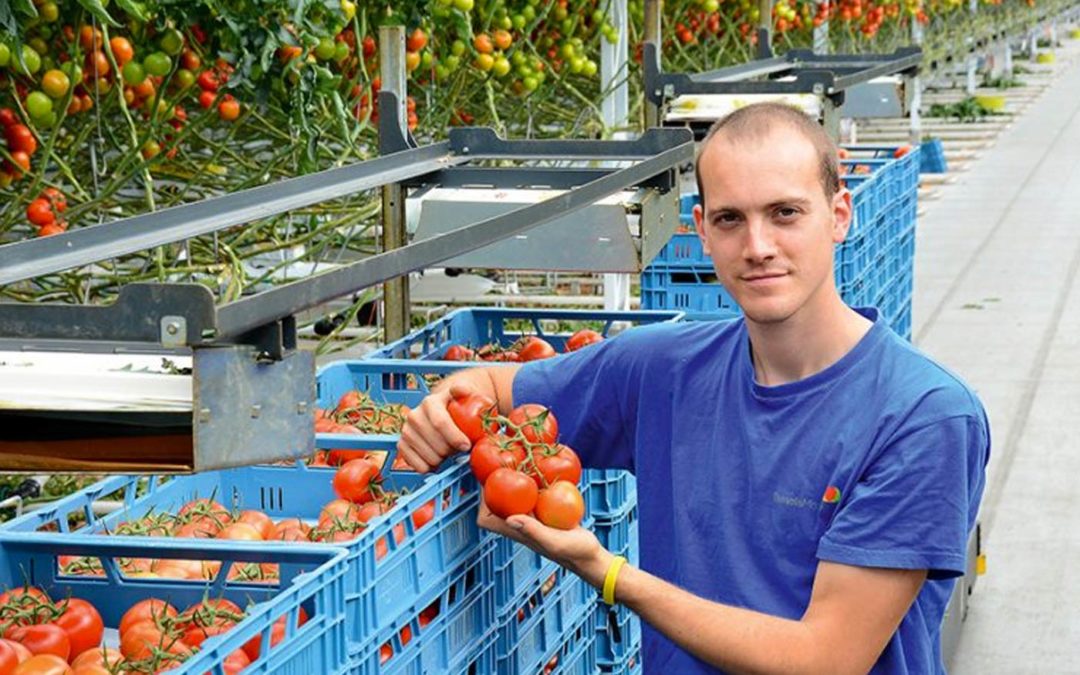 Tomato Masters, of Deinze, Belgium, is producing tomatoes on an organic substrate in response to a discussion with its retail client. Now the cluster tomatoes are promoted in the store as a tasty local Belgian product ‘grown in rich ground’. Crop manager Tom Vlaemynck explains the difference between production on rockwool and an organic substrate.

Tomato Masters was founded in 2012 and in the meantime has acquired the entire designated horticultural zone of 36 ha in Deinze, East Flanders. The company is run by the brothers Herman, Dirk and Johan, Tom (Dirk’s son) and Tim (Herman’s son) Vlaemynck. They originate from Poesele, where they still have a nursery of 3 ha and where their history goes back to 1966. However, that location was too small for five managers so they decided to extend some 12 kilometres further away. At the moment this comprises 10.5 ha of glasshouses so there is space for considerable growth.
The large cluster tomato Merlice is grown in Poesele. Plum, cherry and middle-sized cluster tomatoes of the tasty variety, Foundation, are grown in Deinze. The latter is produced on the organic substrate (6.3 ha), the other varieties on rockwool (4.5 ha).

The growers already had experience with the organic Greenyard Grow Bag at the old nursery. However, when Tom Vlaemynck joined and had responsibility for the cultivation they went back to rockwool. “I didn’t want to take any risks; I knew all about rockwool. Also, we weren’t maximising yield on the organic slabs,” he says.
Meanwhile, thanks to a joint effort with the supplier and crop advisor, Jos Christianen, it became clear how that could change. “The start of the crop is completely different to a crop on rockwool and because we gave the plant too much water at the start it remained vegetative,” he says. “When using rockwool you use the dripper to fill the slab at the start with 20 litres; it is completely different when using an organic substrate. Then you start with just 3 litres. After that you drip through the pot that you immediately put into the planting hole. If you approach it this way you can keep the plant generative.”
Research is being carried out by the provincial research centre for vegetable production (PCG) in East-Flanders, Belgium, to establish the right strategy at the start of the crop, says Hans Baekelmans, of the substrate supplier. “The weight of the rockwool slab has to drop at the start of the cultivation before you start to drain. The weight of the organic substrate should remain stable. It’s a completely different way of production,” says the grower.

Another important difference is the labour requirement for planting. When using the Grow Bag the plants are immediately placed in the plant hole and supported by sticks that are inserted next to them. When using rockwool the block is firstly placed next to the hole and afterwards moved into the hole and supported with sticks. Thus the work is spread over two works shifts. “At first we weren’t quite prepared for a higher labour peak but if you know in advance you can plan for it,” says Vlaemynck. “In total it doesn’t cost any more work. And it’s noticeable that fewer plants fall over than on rockwool.”
Because the plant is placed directly in the hole it produces more roots faster. “It gets off to a very quick start,” he says. You can pick up real speed after the second cluster whereas on rockwool you have to be restrained for a little longer,” he says. However, despite the flying start he wasn’t able to achieve a higher yield. That could have been due to the conditions during the spring of 2016. “The weather didn’t help at the start of the crop. Perhaps you’d gain more from the larger root system if there was a lot more light,” he says.

He didn’t notice any difference in the quality of the tomatoes grown on the two types of substrates.
The Grow Bag comprises peat pellets with a small fraction of cocopeat wrapped in foil. The material is recyclable. “It’s turned into peat compost for use in the gardening sector,” explains sales manager, Els Thoelen. “If you remove the foil you can sell it because the product still has value.”
The fact that this is organic material and is recyclable means that the substrate complies with Carrefour’s FQC-label (FQC = Filière Qualité Carrefour). This label promises to supply consumers with an authentic product of good taste and constant quality produced with respect for the environment in a sustainable relationship between buyer and producer. At the moment five vegetable producers can carry the FQC label: In addition to the cluster tomatoes are asparagus, open field chicory, potatoes and special carrots grown on loamy soil.

The retailer’s interest in crops from soil (in this case potting soil) was the decisive factor for the growers to choose an organic substrate. On the other hand they receive a small extra price for these tomatoes. They are presented in boxes in a single layer which has space for nine clusters. A label on the box describes why the tomatoes are so special and the photo of Tom Vlaemynck shows where they come from. He also plays the leading role in a promotion film that is shown in the stores. And so he is gradually becoming a well-known Fleming.
The label requires compliance with a special set of specifications. As well as the points already mentioned it is necessary to keep a record of the amount of water and chemical substances used. The nursery uses only rainwater and biological crop protection. No chemical substances have been used since planting.
To achieve the right taste and quality Vlaemynck uses a relatively high EC in the drip irrigation at the start of the crop. “Even in the summer we don’t drop to a very low value. Therefore we use a lot of water with a relatively high EC so that the quality remains better. We collect all the excess water.”

An organic substrate can more quickly develop a very varied soil life that encourages plant resilience. This can be a tool to combat against crazy roots and was the reason for a large Dutch tomato grower to recently switch to these grow bags. However, crazy roots were not a problem for Tomato Masters. The grower does pay attention to soil resilience and after a discussion with Koppert Biological Systems decided to add Trichoderma to the substrate; this fungus colonises well in the organic environment.
All-in-all Vlaemynck finds growing on an organic substrate very similar to production on rockwool except for the initial period when a completely different approach to watering is needed.

Tomato Masters, of Deinze, Belgium, grows a large proportion of its tomatoes on an organic substrate because this is of extra value to the customer who sells the product under a special label. In the beginning the substrate requires a completely different watering strategy to rockwool but after the first phase there is little difference in the cultivation. In future it may be possible to gain more from the fast growth at the beginning. 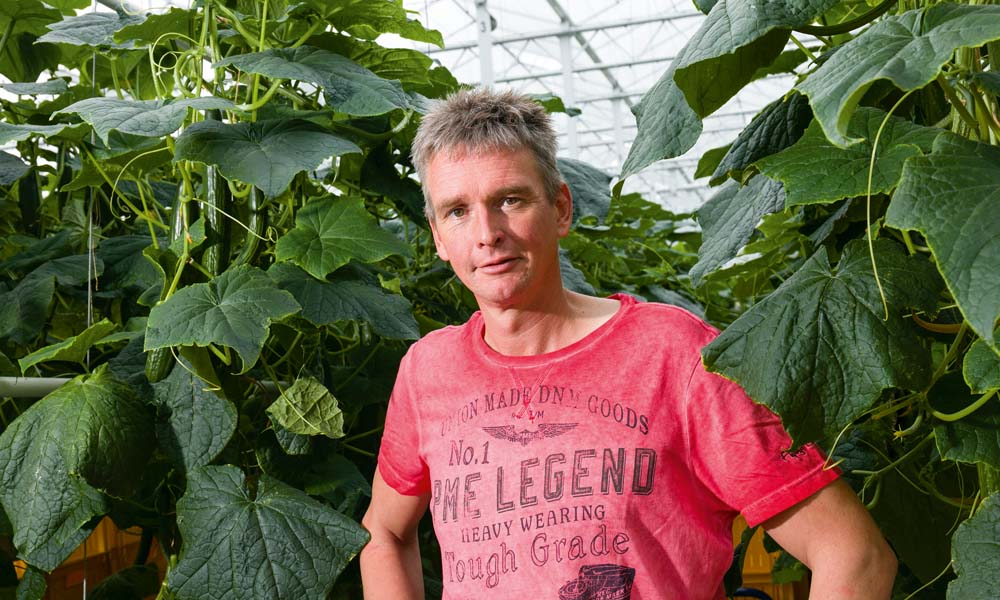