Working towards a good biological strategy 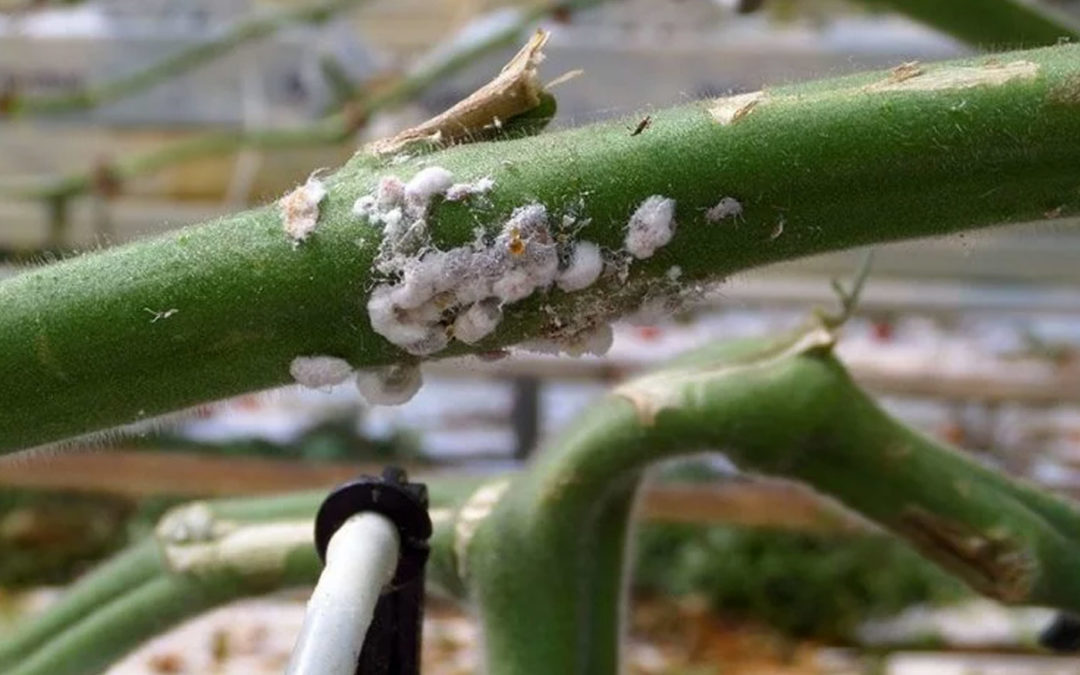 Vegetable growers don’t like to admit that they have mealybug. A group of cooperating parties therefore sent a questionnaire to growers in 2015. From this it appears that mealybug is a tricky pest to control and it is becoming increasingly prevalent in vegetable production, especially in tomatoes, sweet peppers and eggplants. The method of control varies. A clear-cut biological strategy is still lacking. Various companies and research centres are now working on effective, affordable control methods.

Mealybugs live on plant sap and tend to live in colonies. Due to their uptake of so much sap plants can loose vigour. The pests often live on the fruit, in the axils of the stems or at the base of the plant. For example in sweet peppers they live under the crowns of the fruit and in tomatoes often initially at the base of the plant, in the clips and low on the stems.
Growers often overlook mealybugs because they hide themselves so well in plants axils or in the greenhouse construction to escape their natural enemies and/or difficult environmental conditions. Only during peak periods do they emerge on mass.

Adult males and females differ greatly in appearance. Adult females are covered with a protective waxy layer, usually have legs, no wings and are 0.4 to 0.8 mm long. The sexually mature females produce a sex pheromone to attract males.
Fertilized females lay hundreds of eggs, usually in an egg sac that consists of a white fleecy mass. This protects the eggs from predators, pathogens, drought and excessively high air humidity. The eggs also hang more easily on the plants in these egg sacs. After laying the eggs the females dry out. Unfertilised females and fertilised females that are overwintering can survive for several months. Female mealybugs go through five developmental stages: eggs, three nymph stages and the adult stage. The optimal conditions for the development of mealybugs are 26ºC and 60% humidity. Each stage takes six to 16 days. Adult males are winged and are about 1 mm long. They don’t have any mouthparts and therefore cannot feed. They survive only a few days to mate. The males go through six development phases as they mature to the adult stage.

In 2015 Biobest and growers association LTO Glaskracht Nederland looked closely at the problem. They contacted growers and crop protection advisors and invited the growers via the organisation’s website to complete a questionnaire about their experiences with mealybugs and how they deal with the problem. In total 89 growers answered the questions of which 43 grew tomatoes, 25 sweet peppers, seven aubergine and seven cucumbers. In addition, they visited ten growers. Specimens were collected and identified by a European specialist at species level.

Two harmful species were identified: Pseudococcus viburni in sweet peppers, eggplant and tomato and Phenacoccus solani at a sweet pepper nursery.
P. viburni is the most common species found in Dutch greenhouse vegetable crops. This originates from neotropical areas. Under greenhouse conditions development takes one to two months. This species can easily survive the cold and overwinters mostly in the first nymph stage in bark or in the ground.
One pepper grower also discovered P. solani. It is the first time that it has been found in a Dutch greenhouse although this species is prevalent worldwide. It is a major pest in sweet peppers in Spain. At first glance it seems to be whiter than P. viburni. This type is polyphagous and can settle on more than 30 plant families. This mealybug develops in 15 to 33 days at a temperature between 20 and 30ºC.

One of the questions was whether growers ever had or still have trouble with mealybugs. The survey showed that this pest occurs in the greenhouse the whole year round if its spread is not stopped in time. Just 40% of the growers who answered the survey managed to eradicate the pests. On a few nurseries the pests spread so much that it was impossible to bring them under control using the usual methods.
The problem is the greatest in tomatoes. Of the 43 participating growers 19 had suffered problems and it is was still present on 11 nurseries. Of those participating in the survey the area infected with mealybug rose from 7 ha in 2013 to 10 ha in 2015.
Infected plants return about 10% less. Growers certainly waste just as much money searching for and controlling the pest.

Good hygiene measures and identifying the problem on time remain the first steps of control. Growers appear to be very creative at identifying and monitoring the mealybug. They reduce the infection by steaming the sub-surface, burning the infected stems, and using insect glue on substrate slabs and the greenhouse structure.
Most growers control the problem locally. Growers that suffer problems year round blanket spray two or three times when the young plants arrive. On these nurseries new colonies continually appear even after the entire greenhouse has been disinfected. The females escape the control and hide in the greenhouse structure (often next to the meter cupboard). Young larvae, the crawlers, are immediately seen on the young plants.
Many growers use the neonicotinoids Calypso or Gazelle with strong wetting agents to improve the control. The mealybug hotspots are sprayed two to four times after each other with an interval of four to seven days, depending on the level of infection. The old hotspots are checked every four weeks.

Gap in a strategy

A clear biological control strategy is not yet available. The survey shows that experiences with biological pest control are still very limited and the introduction of natural enemies are often too late and carried out with too few predators. Vegetable growers prefer to use biological solutions to limit residue on their products, but this approach needs to be effective. Natural enemies and green pesticides will play an important role in an integrated approach in future.
Various researchers from companies and research institutes are working on the problem and hope to be able to offer effective and affordable methods to growers as soon as possible. Biobest is experimenting this year with predators. Larvae of Cryptolaemus (ladybirds) and lacewings seem to have potential. They can clean up the first hotspots, but the biological strategy has yet to be fine-tuned into affordable solutions for growers.
Several parasitic wasps have also been reported some of which are available commercially. However, these do not offer a solution in the short term.

Based on the survey, a literary review and practical experiences, it is meanwhile possible to provide advice on how to prevent the development of mealybug or to slow it down.
1. Hygiene
Spray the infected plants and contaminated areas before the change of crop three to four times with a neonicotinoid combined with a super wetting agent and/or remove infected plants and dispose of them in rubbish bags. Remove the old crop and plant remains. Disinfect the ground and substrate. Clean the entire greenhouse with formalin or hydrogen peroxide and disinfect materials. Renew the substrate annually. Properly inspect plant material when in arrives at the nursery.
2. Scouting and monitoring
Detect the first mealybug areas fast. The pests hide in crevices and cracks under cloths, slabs, gutters, gutter edges and between pipe rail supports and greenhouse pillars. Inform and instruct personnel. Mark the infected plants and contaminated trellis with tape. Use yellow sticky traps with sex pheromones to attract the males.
3. Physical control
Remove infected material; pick leaves (pick the stem bare). Spray with soap or an oil.
4. Spraying
Control is a matter of patience, monitoring and persistence. The crawlers are easy to kill but the adult females are difficult to control with insecticides because of their protective waxy layer. For good, long-lasting control it is recommended to use a broad action substance that works against mealybug. Take note: this should not be used with natural predators. Substances with systemic activity via the plant sap are usually more effective. Spray frequently because the hot spots often return in the same place (blocks of three sprays with a 7 to 14 day interval, repeat after six weeks if necessary). Spray the stems well. Mealybugs often take cover in the axils. Use a wetting agent to ensure good contact with the pests and their waxy layer. Use a lot of water.

Mealybug is an increasing problem in greenhouse cultivation. A stocktake in 2015 highlighted two common types. Growers address the problem in various ways: hygiene, spraying, a mechanical approach (burning, glue, brushing away) and the use of natural predators. However, these control methods are not enough. Further research is being carried out. 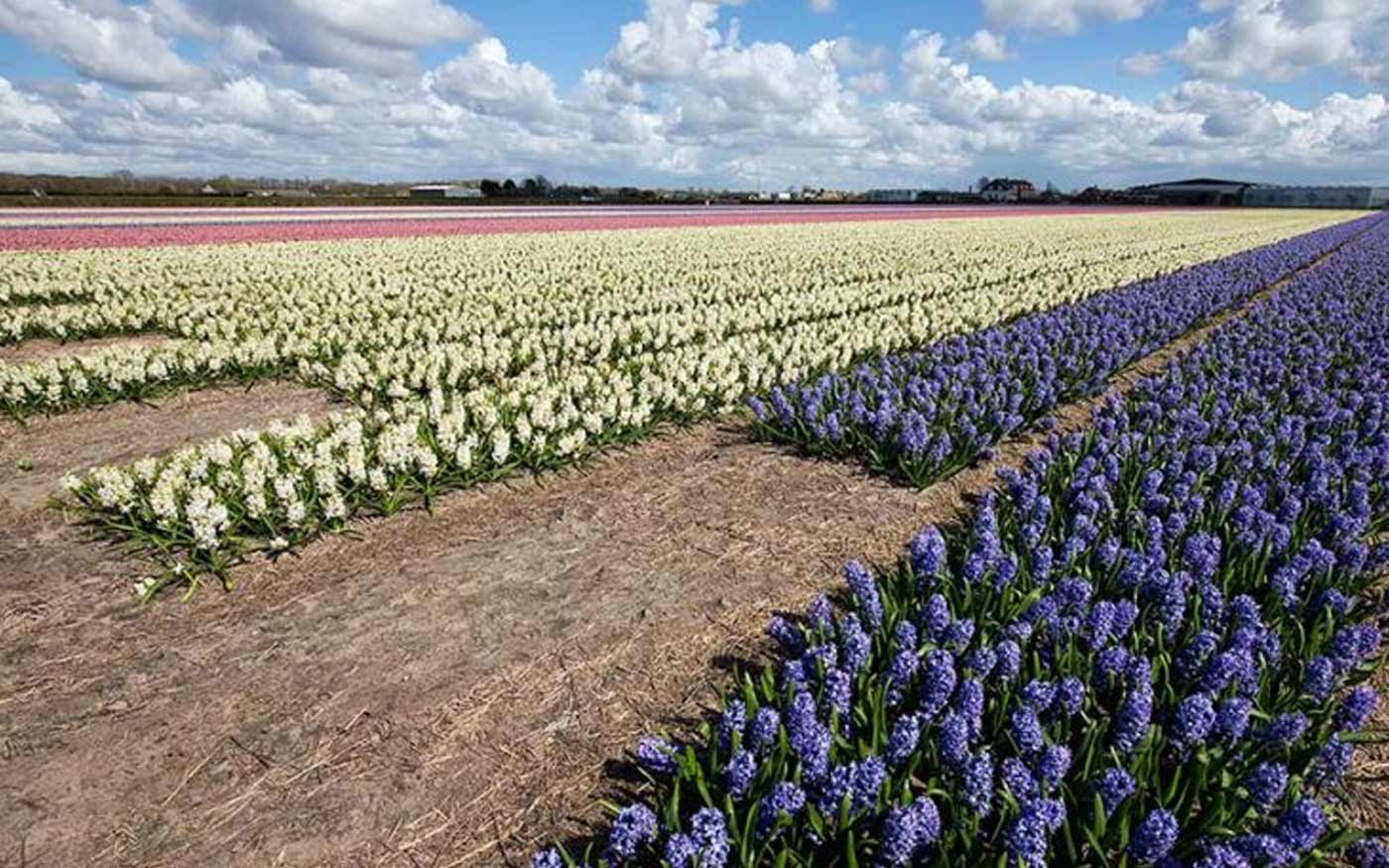 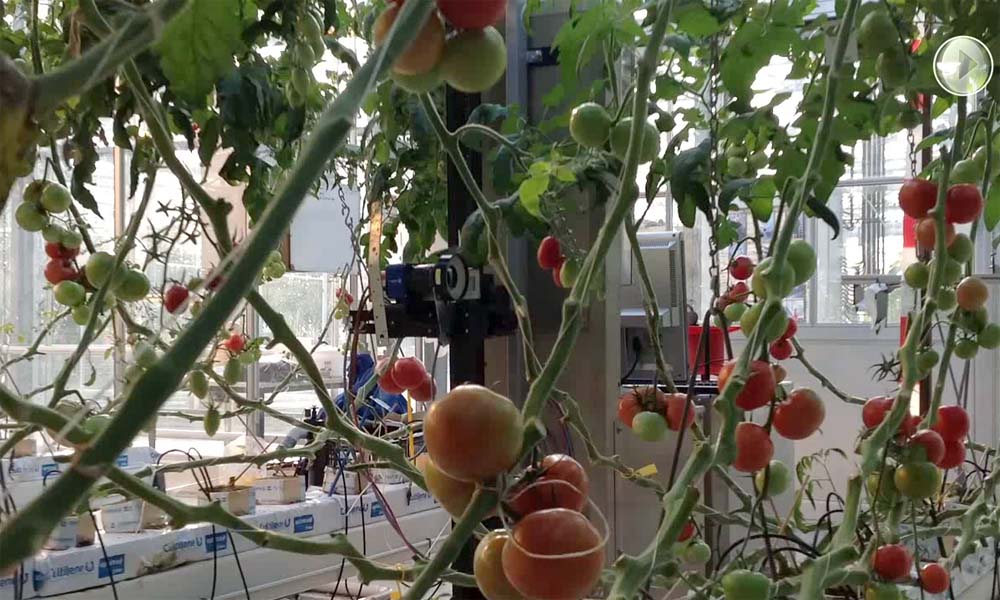