Grow light is gaining ground among high-wire cucumber growers. Reijm & Zn in Berkel en Rodenrijs in the west of the Netherlands are among the many who have recently ventured into lit cultivation. “Lots of colleagues are exploring grow light in cucumbers,” explains Reijm & Zn partner Jan Reijm. “Most people know by now what SON-T can do. We want to learn from a new concept with vertical LED lamps. It has lots of advantages, but there are limitations as well.”

The system that Reijm has been testing on a small scale since the end of 2016 was supplied by the Dutch company Lohuis Lighting & Energy in Naaldwijk, which has been specialising in LED lighting for many years. What catches your eye straight away is that the Saturnus Veg LED lamps are not suspended above the crop in horizontal fittings or strips but in vertical tubes hanging between the plants.

Representative and lighting advisor René Grootscholte: “A huge amount of research has been done into assimilation lighting with LED lamps over the past fifteen years. Reports from research institutions in the Netherlands and Belgium clearly show that vertical lighting concepts in climbing crops such as fruiting vegetables produce the highest lighting yield. And that’s quite logical: the PAR light emitted by lamps above the crop is intercepted by the top leaves, so the leaves half way down the canopy get very little benefit from the higher light levels. The middle of the plant also gets much less daylight for the same reason. Our lights transmit their light over a height of 1.15 metres, which is where it really benefits the crop most: not above but just below the top parts of the crop.”

Reijm & Zn in Berkel en Rodenrijs have been growing two high-wire crops per year on 4.5 hectares for four years now and were keen to test the new concept. “Many colleagues are exploring grow light in cucumbers,” Reijm says. “SON-T has been widely used for some time and we all know by now what it can do. The heat radiated from these lights prevents a number of potential problems in the crop, including Mycosphaerella in the tops. You don’t get that heat with LED lamps. On the other hand, LEDs are more flexible and can be used over a longer period in the year. There are often times when you want a bit of extra light without the extra heat.”

Another striking feature of these vertical LEDs is that they come with two settings with different light spectra. Besides the setting with the usual red/blue spectrum, there is a separate setting that only provides far-red light which has a similar effect to natural twilight, Grootscholte says. “This setting is mainly designed to light the crop with far-red light for an hour longer in the evening after you’ve switched off the standard lights – just as you’d get in nature, really. This activates the phytochrome and gets extra assimilates going to the fruits. In essence, you’re inducing the transition to the generative state.”

“We’re keen to learn from this vertical lamp with two settings,” Reijm says. “I’m interested to find out how far you can get with this kind of system. For us, growing under grow light is vital if we are to continue to compete against Spanish growers. The gain – or rather a better return per square metre – needs to come from better quality and better fruit colour in the darker months, as well as an attractive increase in yields. After all, it involves a considerable investment which you want to recoup within a reasonable period of time.”

Before planting their first artificially lit crop (28 December 2016), they installed lamps giving around 85 μmol/m2/s of PAR light at 55 cm intervals in each plant row in the 540 m2 trial section. That worked out at more than one lamp per square metre and about 95 μmol extra grow light, Grootscholte says. “We have just released an improved version that gives eight percent more light using the same amount of power.”

Higher light levels and more effective use of light by the crop deliver higher yields in various ways. “You can get more plants or stems per square metre or more fruits per plant,” Reijm says. “It’s all about getting the right balance between higher yields and fruit weight. We aim for regular production and an average fruit weight of around 420 grams.”

Results of the first crop

In their first cucumber crop under grow light, Reijm kept the stem density the same as in the unlit crop. This was originally 1.5 stems per square metre and was doubled later to three per square metre.

The plant load was different, however, as the grower explains: “We thin out every second fruit in the unlit crop. Because the plants can cope with more under grow light, we left a set of two fruits on the plant each time before removing the next one. So we ended up with roughly 25 percent more cucumbers on the plant, but in retrospect that was too many.”

The fruit weight was lower and because the plant load was too high, production was less regular. “We noticed a drop in growth rate quite early on, so we waited a while before leaving a second stem to grow. That meant that production lagged slightly behind the reference crop in the first phase, which wasn’t what we wanted, of course. Ultimately it more than made up for that, but it was obvious that there was room for improvement at the start of the crop. We were very happy with the colour of the fruits.”

The second crop was planted in mid-June. This time the young entrepreneur opted for a slightly higher stem density of three stems per square metre, compared with 2.5 in the unlit crop. “We thinned the fruits in the same way – alternately, in other words,” he says.

Because the crop was planted just around the longest day, in a period in which no artificial lighting was used, the fruit weight in the trial section was also slightly lower than usual to begin with. Reijm: “By mid-August we had cut 58 cucumbers of 408 grams per square metre in the unlit crop, compared with 67 of 375 grams in the lit crop. The LED system was on regularly from mid-June onwards. It clocked up quite a few hours, particularly in the first half of August, and you could see that quite clearly from the crop. It was healthy and strong and the fruits were nicer as well.”

With a few more months to go at the time of writing, the grower didn’t want to draw any firm conclusions just yet. “I know roughly what I can expect from a grow light system,” he says. Depending on the specifications and price and with two crops a year, you should be able to cut around 90 fruits more per square metre. “We’re not there yet, but that’s no bad thing. This is a year for learning and we have certainly learnt a lot already. We will also be keeping a close eye on how other growers are getting on. I’m still convinced that we can make headway with this system, and we’re certainly open to that.”

A new LED lamp hanging vertically in the crop enables climbing crops such as fruiting vegetables to get more out of the radiated light over a larger height than systems in which the lamps are positioned horizontally. The lamp has two settings with different light spectra. In addition to the usual setting with red and blue light, there is a setting for extra lighting with far-red light only. 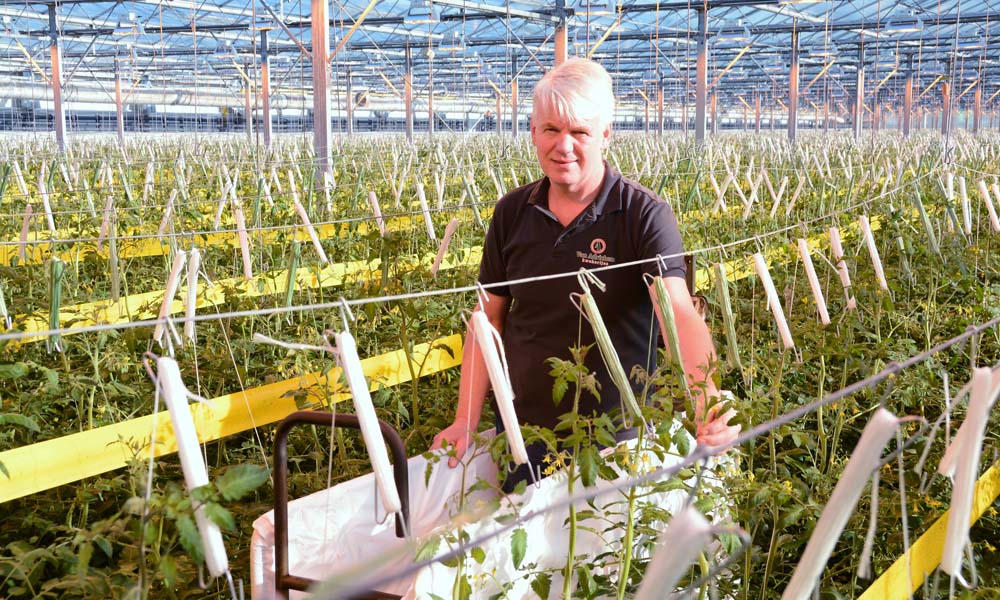 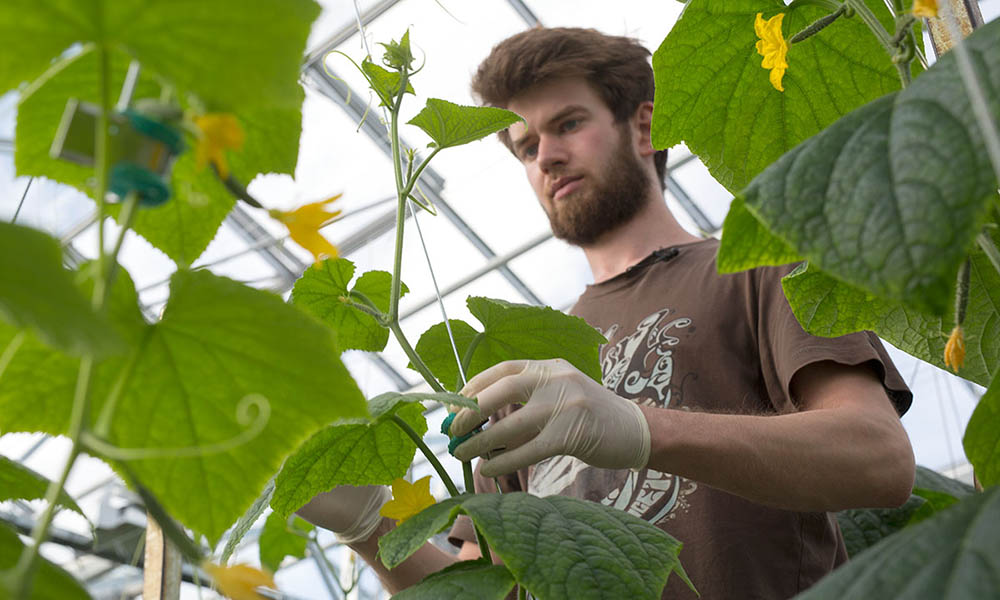 ‘Qlipr is a really interesting system to work with’ 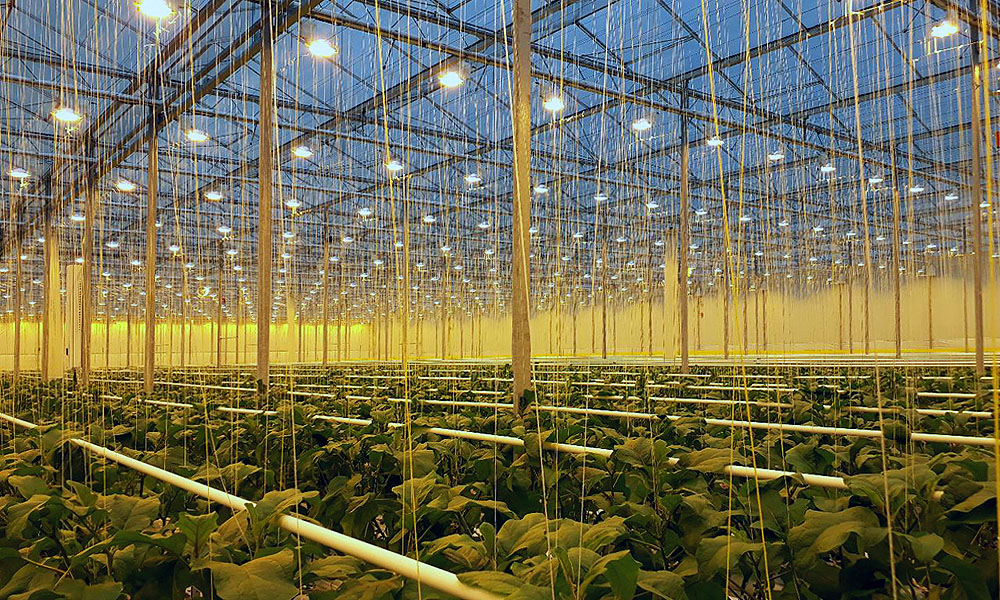